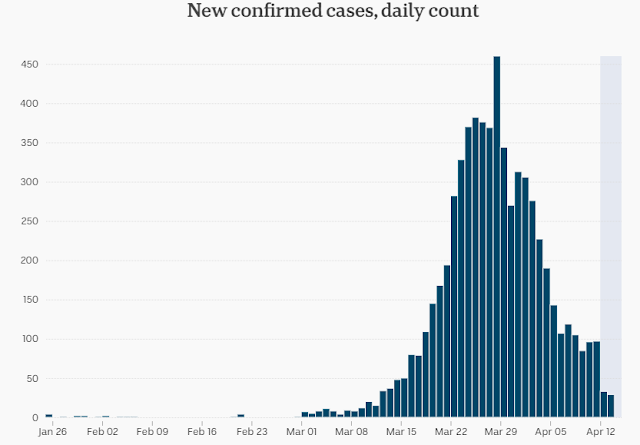 ... and the cumulative number of cases is flattening, per this logarithmic scale: 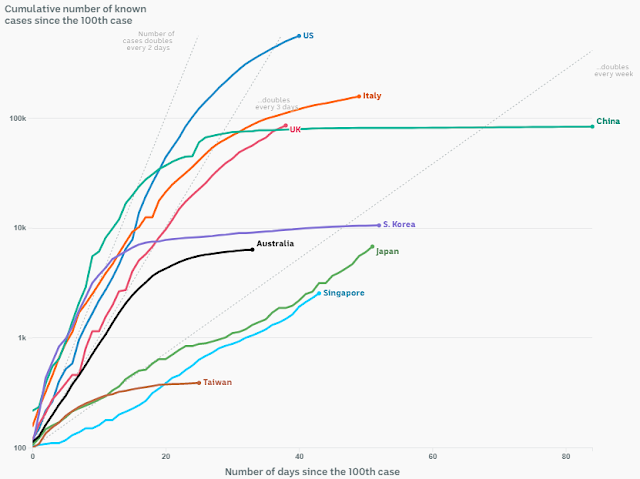 These charts and others are courtesy of the state-owned Australian Broadcasting Corporation; they are updated daily.

We're in lockdown, with non-essential business closed, and people working from home where possible.  But in so many ways, the whole word is in a strange place right now - a singularity for which we may never have a similar experience.  The solutions are well known: test, test, test, trace known cases, and isolate.  But testing depends on the number and quality of test kits, which is quite variable around the world - as is both political and social will.

Per the top 30 countries by GDP, our death rate - the number that matters the most - is 20th, one better than China, which implemented faster and more draconian lockdowns.  the 10 worst death rates per million are:

However, I have learnt from reading between the lines on the numbers is that comparisons are fraught.  Australia, for example, shares no borders with other countries, which is a great advantage.  New Zealand: even more isolated.  Numbers of cases and deaths reported is quite variable, depending on the country and how much testing they do.  Sweden is another exception, as they did not lock down, which is something they have come to regret.

My friend Bill says you should look at the US by individual State.  That puts his State, Oregon, way down with only one death per million.  New York is at top, with 32 deaths per million, followed by New Jersey with 17.  Also above Australia and China's 2 deaths per million is: Louisiana, Michigan, Conneticut, then 11 more.


Actual numbers will never be certain.  I expect that a few years after it's over, analysts will get closer to true numbers by interpolating from existing death rates in the previous few years - and we will be surprised to find the countries whose COVID-related deaths are much higher than reported, as not all COVID deaths are known cases.  This will clearly be so for countries like Indonesia, India and Iran, but may also surprise us in countries like USA, China and UK.

I expect that at least in part, the eventual numbers per country will depend on social cohesion, and willingness to heed lockdowns and isolations.  Governments can mandate or recommend, but it's up to the people as a whole whether they do the right thing.  Complacency is literally a killer.  I see it well in evidence in Sydney - although we have done well by and large by clamping down reasonably early.

How will the world look when we come out of this?  I don't know what permanent changes will be wrought, but I'm pretty sure it will take several years for economies to recover, and many already-disadvantaged people will be far, far worse off.  Expect to see a longer tail of mortality from other poverty-related causes, particularly in less developed economies and pockets of the US.