Today, Australia will get its first female Prime Minister, when the government caucus votes Julia Gillard to replace Kevin Rudd as its leader.

That’s by no means a global precedent. Nor is it a precedent that she’ll be sworn in by a female Governor General (Australia’s first).


But it is a milestone. One that is necessary to a sophisticated society, and one that is overdue, in world terms. Although history suggests it can make little practical difference, nevertheless it remains a meaningful symbolism.

The nature of the leadership change demonstrates one very real point of difference between a parliamentary and a (typical) presidential system. In other respects, Australia’s political processes have come to represent a de facto presidency inasmuch as a large proportion of attention is focused on the leader, at least informally.

In that sense, Australia was moving towards an election with both leadership options – Kevin Rudd and Tony Abbott – facing significant public disapproval. Rudd in particular seems to have lost much of his expected support base due to delaying the implementation of an emission trading scheme, despite his own characterisation of climate change as the “most significant moral issue of our time”. In likelihood, part of the erosion of support would have been due to the intrinsic outcome, and part would have rested with the obvious gap between his words and his actions.

Broadcasts of parliamentary proceedings clearly demonstrate Gillard’s ability in that setting. How she will manage the transition to full-fledged leadership – and how the votiung public will react on a gut level – is something that has historically proven very hard to predict. Although Gillard had been a core part of the Rudd administration’s decisionmaking processes, leadership is another matter.
Posted by S Simmonds at 10:04 am 2 comments

Science is uniquely accepting of new understanding, through new evidence.  (This is, of course, exploited by science deniers, who hide under the veneer of scepticism to push ideology over the balance of evidence.)  Yet most discoveries add to new knowledge, rather than shift paradigms.  Relativity and quantum physics are two of the few examples of abrupt change in the past 100 years.


There is good scientific consensus that the modern human species (Homo sapiens sapiens) first evolved in Africa, left about 60,000 years ago, and arrived in southeast Asia about 45,000 years ago.

However, other human species had left earlier: Homo erectus  first left Africa about 2 million years ago, spread widely, and was to be found as recently as 50,000 years ago in Java. (By contrast, Neanderthals, homo sapiens neanderthalensis, reached Europe between 600,000 and 350,000ya, lasting to 30,000ya.  Tellingly, sub-Safaran Africans have been found to have no Neanderthal DNA, while all other humans have 1-4% DNA from Neanderthals.) 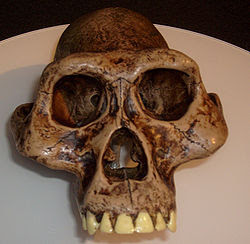 More recently, the find of Homo floresiensis on the Indonesian island of Flores, has been dated to as recently as 13,000ya, going as far back as 94,000ya.  This is well before the emergence of modern humans, although evidence suggests the two species could have lived in close proximity for a time.

The H floresiensis remains are in fact so recent that they comprise original material, as opposed to fossils, which are rock which replaced (at a later point) eventually-disintegrating bone matter.

Because of the spread of H erectus, it has been speculated that this more recent find is descended from H erectus, and still underwent a dwarfism typically associated with animal species that have migrated to island environments.

Adam Brumm of the University of Wollongong reported recently in Nature  a find of tools in Wolo Sege in Flores that pushed back hominid (which is not to say H sapiens sapiens) occupation of Flores to at least 1,000,000ya.

Recently on ABC Radio, Brumm commented that the working hypothesis is that the tools belonged to an ancestor of H Floresiensis, since they were the only ones there that far back.  He also suggested that, rather than descending from H erectus, H floresiensis descended from an australopithecus species, so is hominid rather than human (Australopiths having evolved into the several homo species, and died out, about 2mya).

The important takehomes are that pre-hominids may have left Africa much earlier than hominds, and that H floresiensis is likely more distantly related to humans than any other homo species.  (Note: current thinking has chimpanzees diverging from humans about 5-6mya, which would put floresinensis divergence at 2-5mya.)
If Brumm's comments are correct, there may need to be a name change from H to A floresiensis.

This accords well with plenty of the other evidence on H floresiensis (albeit  floresiensis likely underwent further evolution apart from dwarfism).

Brumm called it an exciting time to be in the field, but also said they now needed new sedimentary basin finds [in Flores] to explore the period from 2mya to 1mya.  Despite the science, paleontology finds are still a matter of skilled luck as much as anything else.