Discovered 70s gems 3: The Chi-Lites - A letter to myself

This sporadic series features pop songs that I never heard at the time, but I recently dug up and found to be absolute gems. It pays to do your research.

The Chi-Lites - the name reflects their Chicago origins - were most prominent from 1969 to 1975, best known for songs like Oh girl and Have you seen her, but their success was mainly confined to the U.S.  Although songs like Have you seen her and Stoned out of my mind (and the song discussed here) were quite listenable, most of the way I'm not convinced they were more than just an average pop-soul vocal group.

Paul Weller might think otherwise. The last single by the Jam, Beat Surrender, had a somewhat surprising b-side: a very careful, faithful copy of the Chi-Lites' 1974 song Stoned out of my mind. That they - well, Weller - would do this gave some hint as to the direction headed with Weller's next band, Style Council.

A pleasant enough song that, but A letter to myself hits the heights for me in a very lush vocal arrangement that I think was seldom matched for its time.  Clearly more pop than soul/r'n'b, the extended spoken-word intro* is definitively hokey - about par for the course for pop gems of the 1970s - but ultimately not very helpful to the song as an integral piece of polished pop music.


*Haven't been able to establish whether Letter's lengthy intro was on the original single - I'm guessing perhaps not, since it extended the song well beyond a radio-friendly length.
Posted by S Simmonds at 9:26 pm 0 comments

Strahov Monastery in Prague, Czech Republic, was founded in 1149.  It has two libraries, the Philosophical Hall and the Theological Hall. 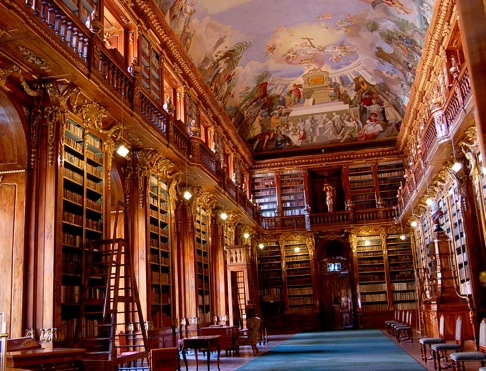 The Philosophical Hall seems to have a lot in common with showpiece libraries around the world: ornate balconies, vintage books and a painted ceiling.  But distinguishing this library is the existence of a full panorama photo in all dimensions that has been created of it.  Stitched together from thousands of high resolution photos, it claims to be the current "largest indoor photo in the world".

You can view and navigate it in full here.  It is wonderful to be able to pan all through this vista, and zoom to closeups of the books (yes, you can read the titles of quite a few of them).  In fact, most of the shelves seem to hold two rows of books, one in front of another, so there's possibly twice as many books here as it seems.  How to build up a large number of impressive-looking books: either get them custom bound, as Vanderbilt often did, or acquire numerous sets of books.

Some of the titles I saw here include a set of the complete works of Goethe, and a number of sets of history books on various countries, such as "Theiner Monumenta Historica" sets for Poland, Russia, Hungary, etc.   There's more than immediately meets the eye, too.  If you look closely, you'll see that books are frequently shelved

Libraries are built up, expanded over time.  Yet like this one, many libraries become mausoleums of artifacts, rather than breathing, functional communicators of knowledge and wisdom.  Inevitable in a sense, because paradoxically books become both more valuable over time, and for the most part less useful.  This library has, in fact, been transformed into a museum.  It would be comforting to think the Strahov libraries could still be used for academic research, but it rather looks like such a use would be discouraged.

Coming up: another display library, but of a very different type.  What would you collect if you had more money than you knew what to do with?
Posted by S Simmonds at 1:54 pm 2 comments

In defence of Kevin Rudd on climate change

Listening to ex-PM Kevin Rudd on ABC's Q And A recently, some meaningful insights emerged, on the political process and the sometimes opaque approach governments have to communication.

Yet the subsequent media storm seemed to focus on the more trivial, obvious revelations.

Rudd was talking over the events that lead to his downfall.

His period as Prime Minister, 2007 to 2010, came after 11 years of conservative rule. As PM, he characterised climate change as the greatest moral challenge of our day - yet he apparently fluffed it, and shelved the planned emission trading scheme.

This led in no small part to his drop in popularity, and thence to his being deposed as Prime Minister.

"we'd already put the emissions trading scheme to the senate twice... the Coalition voted it down twice... Following the next election there was no way the Coalition was going to maintain dominance in the senate, as it's proven. The Greens now control the senate as of 1 July this year. So a basis for delaying the implementation two years was mindful of the fact the senate would change."

He also mentioned some cabinet division on the way forward, but the implication was clear: they simply needed to wait for a change in Senate. [In Australia, senate terms are twice that of the lower house, so only half need to face the voters each electorate. A change in government thus means the first term is often not long enough to get through reformist legislation, particularly after a lengthy reign of a previous government.]

Rudd said that his mistake was not ploughing through. However, there came a cogent response from a member of the audience:


"You've certainly admitted your first mistake on the ETS. Surely now your second mistake is actually not articulating what you've just said to this audience to the Australian people about a year ago. At least we would have had a better handle on what was driving your decision to back flip on an issue that you'd fundamentally been given a mandate to push through. I mean here we are now 12 months later and you're umming and ahing but at least you've engaged us on a fraction of probably what the story is. Isn't your second mistake that you actually didn't tell us - and you didn't give the Australian people the respect to actually articulate the story 12 months ago?"

Rudd: "I think the response to that question is that, guess what, political leaders are not perfect."

Of course, the subsequent media furore focused on the internal cabinet divisions, and the part played by the current Prime Minister, Julia Gillard.

It remains that the current government intends to move forwards on climate change, and should be able to do so, with the impending senate makeup. Instead of an emissions trading scheme, they're now working on a carbon tax. Yet the government's popularity is quite low; again, the media is focusing on the wrong end of the stick: giving vent to those to whom the word 'tax' is ideological anathema. Still, it's the government's fault for not emphasising that households would be sufficiently compensated, and there will be no nett revenue increase.

Full transcript of Q And A available here.
Posted by S Simmonds at 11:02 am 0 comments