Autumn leaves are blowing around while elsewhere spring flowers are confused into coming out for a second season.

And this is a population safely ensconced in a large, safe, wealthy metropolis.  Never mind the rest of the world that lives at the margins.

We knew about this over 25 years ago.  We could have stopped it if we'd done the right thing.  Conservative politicians are beholden to a self-centred support base that's in denial because they don't like to be disgusted [by reality], and while things are okay within their immediate circle.  So-called liberal politicians are likewise captive to a voter base and marginal voters that doesn't want them to make the hard choices.  Voters who do not vote Green are culpable.  Non-voters are absolutely culpable. 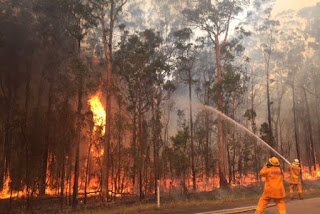 Phew.  Now that I've got that off my chest... no, I don't feel better.  But I will offer a couple of sparks of hope today.  And one evil signpost of complacency.

First, the global investment in renewables - half of which comes from China, a command economy - is now double the investment in fossil fuels.  Too little, too late for a two degree rise in temperature, but the catastrophe is slightly lessened.  And a possible forward is flagged by the increase in climate change litigation.  This is the path that had demonstrated success when tobacco companies were fostering political paralysis: courts may help achieve what couldn't be done by those you voted for.

The evil signpost of complacency: Marketing makes our favourite animals seem common as they slide towards extinction.

17-Apr-2018 Sydney bushfire:  The "Holsworthy" fire has a far more direct, tangible impact.  It was raging over the weekend; on Monday, a colleague who lives in Menai stayed home, messaging me: "Sore throats and noses from the smoke.  The fire has formed an arc around us.  All depends on the winds and ember strikes.  We just watch and wait."
At Jannali station on the way home last night, the plume was only a few suburbs away: 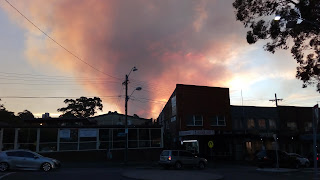 The smell of the smoke is novel for a while, but then makes breathing laboured.  As an asthma sufferer, I couldn't survive it up close.  All asthma sufferers would clearly need to get away early, and stay away until the smoke dies away completely.  Climate change?  Because this happened so far out of season, response was not as good as it could have been.  Some specialist firefighting aircraft could not be used because they had been sent back to the U.S. at the end of the season.
Posted by S Simmonds at 7:51 am 2 comments