This election, I worked at a polling station, which is always a worthwhile experience.  In making these observations, I appreciate the Australia voting system is a little unusual compared to most others, so it makes sense to note a few points for overseas readers.

1) Voting is compulsory.  That is, you have to front up on election day and get your name marked off - which is not to say you even have to mark the ballot papers, nor even lodge them in the boxes.  But having made the trip, most people do the lot.

2) Australia is bicameral.  The Senate (upper house) is elected by proportional representation, so some minor parties get up.  Often enough. this means the government of the day has to negotiate with minor parties to pass legislation.  The last session was like this: outcomes were effectively decided by a quixotic conservative senator.  However, the government before that briefly had the numbers in both houses.

3) Australia has preferential voting.  For the lower house, the voter has to number each candidate in preference order (typically around six candidates), which means a vote is not wasted on a minor party, because it will flow through to your preferred major party candidate.  For the upper house, you either have to number the lot (84 candidates in NSW this time), or vote for a single party ('above the line'), which notably means that party gets to choose where your preferences subsequently get directed.

Some personal observations, based on a Sydney Eastern Suburbs polling station:

a) Despite some voters being half-hearted, everybody was remarkably cheery in fronting up to have their names marked off and take their ballot papers.  I can't recall a more uniformly cheery parade of people.

b) In bumping up the valid votes, it makes an enormous difference what is said to the voters in handing over the papers.  Most people know in general how to vote, but it's worth reminding them that a) all lower house candidates have to be numbered, and b) voting 'above the line' requires a single one marked in the party box - but it means that that party chooses where to direct your preference.

c) Nearly everyone voted above the line, because few have the stamina to preference 84 candidates in order.  However, of those who did vote below the line, the overwhelming majority were Greens voters.  One possible interpretation is that they're likely to be more engaged in the political process.

d) Few Senate votes went to parties other than the two major ones and the Greens.  Of those that did, the two biggest-vote minor parties were the Australian Sex Party and the Liberal Democrats, neither of whose platforms would be known to more than a handful of people.  The vote for the Sex Party demonstrates, I believe, the number of people who didn't take their Senate vote seriously.  And I think the Liberal Democrats were largely voted for by people who confused them with their British namesakes - which would have been rather a mistake, because whereas the British party is soft left, the Australian one is closer to hard right, based on their preferencing intentions.

e)  In collating votes, I noticed the most bizarre expression of political intent I've ever seen.  The voter had numbered their Senate preference to flow first to a hard rightwing party, then hard left, then hard right, and so on.  Obviously the voter knew the parties, because he [sic] was consistently swaying his preferences between either side.  Given what I said before, the voter could have made sure the preferences came to lodge with their preferred major party, but there's no way they could have been certain a couple of the preferenced didn't stick with any one of the minor ones, which in a fit of horse-trading found itself with enough preferences to get over the line.  It's happened before (cf Steve Fielding).  If it's a thumbing of the nose at the election, there are easier and more noticeable ways of doing it.  Any guesses as to why someone would vote like this?
Posted by S Simmonds at 2:20 am 2 comments

Rees, Dawkins and Gould: finely picking the cleft between science and religion 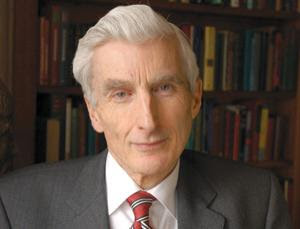 I first encountered Martin Rees, president of the Royal Society, in the pages of New Scientist last year: a brief interview on occasion of the 350th anniversary of the Society. He talked science, but looked nothing less than an Establishment bastion (and he’s also Astronomer Royal, Master of Trinity College, Cambridge, and in the House of Lords).


Just recently, I heard him in a brief piece on the ABC Radio Science Show. He was talking on the divide between science and religion – and he rather surprised me with some non-establishment words. His conversation drilled into some finer points of this divide. Inter alia:


“I agree with Richard Dawkins that fundamentalism… is a real danger, and I think we therefore need all the allies we can muster against it, and I would see the Church of England and the Archbishop of Canterbury, for instance, as on my side against fundamentalism. Therefore it seems to me counterproductive to rubbish people like that. I'd like to see them on my side, and as a Brit who grew up in that culture, I'm rather supportive of the Church of England.
And I think there's another reason where I think his attitude is also damaging. Suppose you were teaching a group of kids in a London school and a lot were Muslims and you told them that they couldn't have their god and have Darwin. They're going to stick with their god and be lost to science, and that, again, I think is counterproductive. So I believe wherever possible one should have peaceful coexistence with mainstream religions.”

The Templeton Prize was apparently a notable point of departure between Rees and Dawkins. The prize “honors a living person who has made an exceptional contribution to affirming life’s spiritual dimension, whether through insight, discovery, or practical works”.

Rees said Dawkins labelled him a quisling because Rees was “less hostile to the Templeton Foundation than he was.” But then: “I don't go all the way with the Templeton Foundation because they believe in constructive dialogue. I think there's limited scope for constructive dialogue, I think there can be peaceful coexistence, but I don't believe theologians can help with my physics”.

Per se, that’s not too far from the resolution attempted by another scientist, Stephen Jay Gould. He coined the term Non-Overlapping Magisteria (or NOMA): “Science tries to record and explain the factual characteristics of the natural world, whereas religion struggles with spiritual and ethical questions about the meaning and proper conduct of our lives. The facts of nature simply cannot explain correct moral behaviour or spiritual meaning”.*

Of course, that satisfied few who weren’t already satisfied.  And although the two are similar, I rather like Rees' turn of phrase.