Word of the day: sept

It's not what you think.  Not even remotely.

I'm not referring to the Game of Thrones equivalent of a church (albeit it's the same spelling), nor any other meanings derived from septem, Latin for seven.

A sept is a division of a (large) family, especially a division of a clan.  It's particularly applicable to Scotland and Ireland, where there can be large groupings of people with identical surnames.


"In seventeenth-century Scotland Clan Campbell stood by itself as a separate race, almost a separate state, whose politics were determined by the whim of its ruling prince.  Built upon the ruins of many little septs, it excelled [sic] in numbers and wealth every other Highland clan."


From John Buchan's Montrose (1928, p213), a biography of James Graham (1612 - 1650), Marquess of Montrose.  He was a Scottish nobleman in the time of the English Civil War, who fought on the royalist side against the Covenanters.  This was a Scottish movement which replaced the Anglican hierarchy of bishops with an assembly of elders, from which arose the Presbytarian church.  Montrose was on the losing side in several ways, but his victories gave him a good reputation as a military strategist. 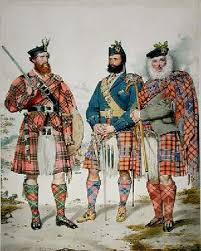 Sept appears to be a corruption of sect; State Papers from 1535 and 1537 refer respectively to secte then septe; possibly influenced by the Latin saeptum (fence, enclosure), which also gave rise to the anatomy term septum, for a partition between two cavities.  Sept is cognate (language derivation-equivalent) with the German equivalent, sippe.