Mark E Smith is dead.  I was quite taken aback.

Thus The Fall is no more.  A band whose only constant was Smith, over a period of 40 years there were, at last count, 66 other members, a third of whom lasted less than a year.  Smith famously said "if it's me and your granny on bongos, it's The Fall".  Or, as a recent reviewer said, it's "Mark E Smith and whoever he's barking orders at".

One of the few bands I've seen in three different countries, I was fortunate not to see them when he had his back to the audience the whole time.  Apparently.  These days, the only albums I have of theirs are Bend Sinister, Infotainment Scam, Extricate, the A-Sides compilation and, hopefully still findable, Slates.  There's a lot to like if you persist, but my personal favourite is Domesday Pay-Off, a rejigged Bend Sinister that excludes Dktr Faustus and Bournemouth Runner, but adds singles There's a Ghost In My House and Hey! Luciani.  Look for the tracks R.O.D., Gross Chapel and Riddler.

My current album favourites are Slates, Bend Sinister and Extricate.  All have much to recommend, but there's so much catalog (31 studio albums) you'll always find something to like.

The cause of death has not been stated, but it's probably due to long years of drinking and smoking.  And crankiness, no doubt.  The above reviewer's characterisation of Smith/the Fall was:

"a shambolic artist whose astonishing productivity, creative restlessness, and utter disdain for the niceties of civil society know no bounds. This is Mark E. Smith’s lawn, and we’re all invited to get the fuck off of it."

The NFC Conference Championship was the last playoff game before the Super Bowl.  It was exciting, but it was also strange and totally unexpected.  The underdogs came through in a big way, and the only people who were happy with the result were the bookies and the denizens of Philadelphia - oh and anyone who loves a great game of gridiron.

The Philadelphia Eagles were the best team this season, and the best chance to defeat the New England Patriots at the Super Bowl.  But then star quarterback Carson Wentz was injured for the rest of the season.  Roll on up second stringer Nick Foles, and everyone expected the Wentzless Eagles to die in the dust.  But they didn't.

Instead, the NFC Championship was an exciting game, where Foles - after an indifferent string of games - seemed to channel Carson Wentz.  How could this be?

Credit must be given to the Eagles coach Doug Pederson.  The team he built was strong - as strong as you like - but nothing can help you if you have an average quarterback.  When Foles took over, he seemed pretty average.  But Pederson must have done some serious work on him: in this last playoff game, Foles played like Carson Wentz incarnated.  Seriously.  Earlier this season I remember seeing Wentz lose the pocket, move around and throw the ball as he was being sacked - and still connect with his receiver.  A magnificent effort.  And in the process of winning the Eagles the Championship game and the Super Bowl berth, Foles did exactly the same thing under great pressure.

Of course, the Patriots have been the team to beat for over fifteen years.  Their run must come to an end, but they still have a sterling coach  in Bill Bellichick, an effective and game-changing quarterback in Tom Brady, and an absolutely solid roster throughout their offense, defense and special teams. 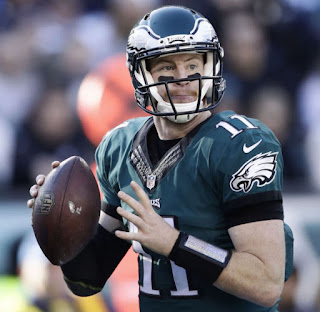 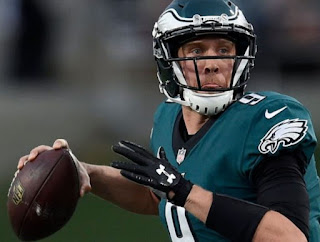 Will Foles pull off the unexpected again, at the Super Bowl?  The odds are against him.  And the pressure, too: the Super Bowl is a whole different level of game, with a supercharged crowd and the eyes of America (and a few other places) watching for another Patriots comeback if the Eagles even pull ahead at all.

Look out for an exciting, explosive Super Bowl.