I learnt yesterday that my five-year-old looks forward to the end of the weekend. She loves school that much.

She's been going three weeks now. This photo was taken on her first day. You can see how keen she was, before she had even been. 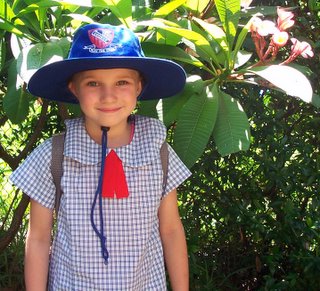 (she directed the shot herself. Must have the frangipanis in it.)

Against my expectations, I haven't tried to give the kids intensive training. I think there's plenty of time for them to shine, and it would help their balance to learn with their peers; learn from them. I remember plenty of times I vagued out at school because I wasn't learning anything (new), only to miss out later when there was something new to me. At the other pole, some of my daughter's classmates are still crying after three weeks, and are clearly unready.

The kids both show signs of brightness, and that's enough for the moment. Possibly not as bright as their cousin Matthew, but my gut feeling is that his (somewhat obsessive?) nature is due to his mind being too advanced for his developmental age.
My kids are also very happy, and I wouldn't want a regime of intensive training to spoil their time of joy. The mix is right if my daughter begins her working life joyfully.

Happiness and balance. All she needs.
Posted by S Simmonds at 7:56 am