The far corner of the sky was glowing when I set out; a patch of sky light in the east-north-east. It was still dark, and moisture was in the air although it wasn’t quite raining.

Street lights, streetscape and the occasional plume of pollution from a passing car; night can’t disguise the fact that we live as far away from the country as you can get in Sydney.

It wasn’t too cold; once I’d warmed up with a run, I stayed warm. I was listening to Explosions In The Sky; still not getting too much out of it, but pleasant as aural background.

We live at the back of the basin that is Coogee; half the world is over a hill and the rest is out to sea. Close by, we’re bisected by Carrington Road; in the words of the five-year-old, you can “see the whole world” from either end – or from anywhere in the semi-crown of hills surrounding the beach. From that perspective, Coogee feels like the whole world.

Marked development has increased the density of the built environment over the past six years. On our block alone, there’s been: a house replaced by a multi-dwelling building; a second storey added to a semi; a carport attached to the front of a house (which diminished its presence); an additional dwelling built above a set of garages; and our alterations (invisible from the street, no increased footprint). This is typical of the changes in Coogee. Like the light building in the dawn sky, the difference from one point in time to another is imperceptible, until suddenly you notice the world is different.

It’s an interesting world if you like looking at houses – which I do, sometimes. Imaging what it’s like to live in this house or that, being much fussier than reality affords us. Yet although most houses are in better shape than ours, most have less open space, and no large trees. Quite a canopy there would be if everyone had our quota. 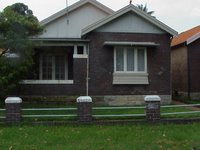 It may seem like a hotchpotch, but the houses are largely variations on a small set of themes, which lends both unity and diversity to the experience. California bungalows abound, but with so many mutations to the façade that it’s hard to find two alike.


More than one property has replaced the nature strip with a collection of native plants. It may look lower maintenance than grass, but it’s probably not. Rare enough to seem out of keeping, 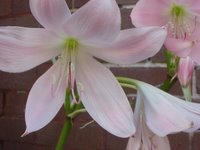 but a good idea on consideration. Yet our own garden is decidedly non-native; more by inclination than conscious choice. Rather out of keeping, if you think we should learn to appreciate the subtleties of the dry continent.

Light by the time I got back. A short time later, the sun briefly bathed the back garden in yellow, speckled by gentle rain.
Posted by S Simmonds at 12:09 pm