Two events of 2008 far outweigh in significance all others. I see Obama's election as having a greater long-term effect, particularly as he presents such a stark contrast against Bush's tenure in every possible way. 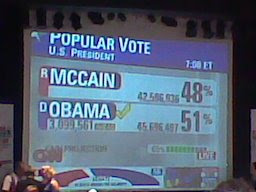 Obama's victory brings a lot of promises, and no guarantees. Even so, nothing short of revolution could change the landscape of American politics the way Obama has. This makes him the next best.

"I think... our values and and spiritual life matter at least as much as our GDP".

Simply in the manner of political discourse, he has made American politics a less venal, more noble arena. Although this is more a change in spirit than substance (it brings about no structural change), his influence will clearly be felt over the next few election cycles. But more, his presence has encouraged people to be more active in political processes, whether as a volunteer or voter. Disenchantment with "politics" only serves vested minority interests; greater popular engagement means, at the very least, those in power are obliged to a greater accountability to the public. (All this is true regardless of political hue or political system.)

I have found it hard to fault the consistency of Obama's character and vision, as he espouses in The Audacity Of Hope. (The most I can find so far is minor quibbles with use of language*, but there is context to this.) One could say that his efforts to unify views of polar opposition are doomed, but on the other hand he hangs his hat on the 'liberal' end of American politics.

"I am angry about policies that consistently favor the wealthy and powerful over average Americans, and insist that government has an important role in opening up opportunity to all. I believe in evolution, scientific inquiry, and global warming..."

I'm not overwhelmed by the stars. I think, for instance, that some of his appointments to date are going to prove fraught. Hilary Clinton is not the most diplomatic person one could appoint to the top diplomat position. And she will certainly not ease middle east tensions (nothing short of freedom for the occupied territories and removal of all Israeli settlements would achieve this - and that will not happen under her watch). Obama's appointments for science and for climate change are brave, but they are knowledgeable as scientists, not for their ability to navigate the treacherous political waters. The positions need a reasonable amount of scientific understanding, but a particularly strong political nous - not the other way around.

Still, I'm getting some very good signals from Audacity of Hope. It shows great clarity of vision, and it is one of the most pleasant reads I've had in a long time.


* For example: "...and then, with the walls of the status quo breached, every form of 'outsider' came streaming through the gates: feminists, Latinos, hippies, Panthers, welfare moms, gays, all asserting their rights, all insisting on recognition, all demanding a seat at the table and a piece of the pie." Some very legitimate claims are lumped in with some relatively spurious ones; on the other hand, he could be said to be making a characterisation of perception.
Posted by S Simmonds at 10:50 am

Email ThisBlogThis!Share to TwitterShare to FacebookShare to Pinterest
Labels: Obama, US President