Here's a rare opportunity to gain some perspective on celestial bodies, courtesy of Wikipedia.

In the first set of pictures, the order of magnitude successively builds up through our planets and different types of stars. 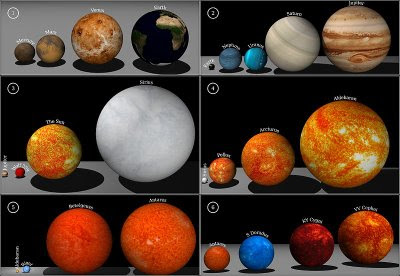 perspectives: Earth, planets, Sun, and other stars
NOTE: to view better, click on the image to expand, or see the original


It's a very useful way to represent varying orders of magnitude. Resolution is better in the original, where the names are clearer*.


Our nearest neighbours, Venus and Mars, are quite different from each other, in composition as well as size. Mars' radius is only about twice that of the moon. Venus is closer to the sun than Earth; its oceans were boiled away 4 billion years ago. Mars has traces of ice, but no liquid water, as its atmosphere is (now) too thin.

It's worth scanning through the full originating article on stars, for some points of interest. Our sun is quite small compared to other stars, but there are some that are smaller (and denser), having burnt out and collapsed. The article also lists the various types of star by name, but actual stellar classification is much more complicated.

The other picture shows various moons of the solar system in scale against Earth. 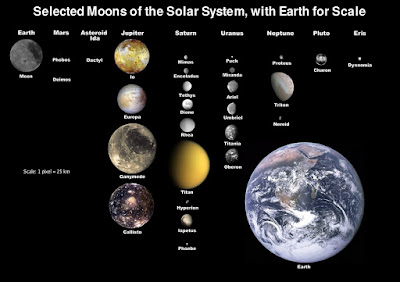 Moons of the solar system, compared to Earth
for better resolution, click on the image to expand, or see the original


This includes the two biggest moons, Jupiter's Ganymede (rock and ice, often featured in science fiction stories) and Saturn's Titan (dense atmosphere, surface liquid), which are both larger than the smallest planet, Mercury (which is slightly larger than the third biggest, Callisto at bottom). Our moon is the largest of any rocky planet in our system, having broken off from Earth early in planetary formation after Earth was hit by an object of about the size of Mars.


*You can also look at the current Wikipedia holding on relative sizes, which shows our system's full planet range.  You can also scan through the Wikipedia list of most massive stars.  Note the discussion there, indicating there remains some uncertainty at the big end (which is largely theoretically inferred), to the extent that the various Wikipedia articles and pictures have inconsistencies.
Posted by S Simmonds at 10:22 am