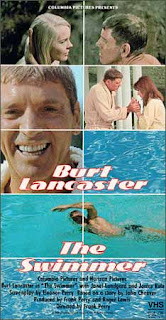 This is a most unusual Hollywood film.  Not for its mise-en-scene and locational filming, the stomping ground of the rich East Coast upper middle class.  But for the way it blended realism and allegory in a fashion hardly ever seen in Hollywood.


It is based on a short story by John Cheever which was apparently substantially similar to the film.  However, the level of detail of the film is such that credit must clearly be given also to the scriptwriter, Eleanor Perry (wife of, and sometime collaborator with, the director Frank Perry).

The plot:
Burt Lancaster is Ned, a wealthy advertising executive, who conceives of a plan to "swim his way home" by doing a circuit of the swimming pools of all the people he knows in his leafy, well-heeled neighbourhood.  The film is effectively a group of set pieces at each of the pools he visits.

At first, he is greeted with heartiness as warm and eager as he himself exudes.  But gradually through the film, the apparent balmy day turns sharply autumnal, as do the people he meets.  A troubled recent past slowly emerges, which he doesn't seem to remember.
The receptions accorded to him slowly turn frostier, bitter even, when he meets some who he still thought of as close friends.

Gradually, as the circle closes, Ned arrives back at his own house, which is deserted and boarded up, his family long gone.  The rain pelts down on him, mirroring the futile blows he makes on the front door as he collapses and sobs.

I first saw this film as a teenager; it left an indelible mark on my memory.  But I don't fully trust my young impressions of adult films, so I grabbed the chance to see this a second time recently.  It didn't disappoint.

Certainly, it is dated.  It is very much a reflection of its 1960s wealthy, somewhat conservative milieu.  Yet the nature of the storytelling is quite disarming: its beginnings are steeped in super-realism, which is where the cinematography remains.  But allegory inexorably takes over the narrative.  You know the real story is below the surface; hints are given, but it's never firmly spelt out.  You start to wonder about his fall from grace, and the genre seems to have slipped into mystery: a puzzle to be revealed.  But it turns out that the story is the journey itself; the denouement is the very fact of his fall.

I am not familiar with the other works of the writer and the director, so this film must stand alone, albeit bearing the mark of the original writer, Cheever.

Made in 1966, but not released until 1968: the original director, Perry, left this project uncompleted: the cited "creative differences" probably saw him at odds with the film's producers.  For what it's worth, Sydney Pollack finished it.
On a final note, those who came in late may remember Burt Lancaster as a somewhat cheesy Hollywood actor with little that is memorable to his credit.  So it is salient to point out his presence in two films of moment: this, and an even more memorable work, 1957's hard-hitting film noir, Sweet Smell Of Success.  Seek it out.
Posted by S Simmonds at 1:07 am

I never knew this story had even been fimed Stephen. Cheever is not nearly as high-profile as he should be; he was probably one of the best short-story writers of the 20th century.
Thanks for a mouthwatering description of the film - I want to see it now. Another good performance by Burt Lancaster was Birdman of Alcatraz.
I was still pondering a comment on your last post when you surprised me with the alacrity of this one!

Sound as if he's had a nervous breakdown old boy. Bit like Zen and the Art of Motor Cycle Maintenance meets The Great Gatsby. Top Stuff!

Gatsby's mob would sniff at the new-moneyed values of this crowd.
But you're right on one thing. Ned's crisp, energetic energetic outlook at the start of the film was gradually pared back as he was forced to face realities. The beauty is in the way the story revealed itself in the gradual realignment of the externalities.

I have to say, Bazza, Burt Lancaster is not an actor I warm to - the two films I mentioned were impressive productions anyway. But I'll see if I can find Birdman.