Pers: Memories of the Sando, and the best grafitti ever 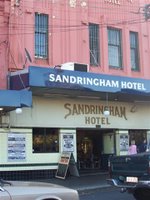 In the late 80s, my whole household (I had four flatmates) would wander up to the Sando on Thursday nights to watch Roaring Jack. They were a heavily political Celtic rock band, playing songs like Thin Red Line, The Lads From The BLF, Yuppietown, We Don’t Play No Elton F****** John. A rollicking institution it was, the crowd packed tight and jumping all over the place, and we’d frequently stay until closing, where Dirty Old Town was the send-off and the leftovers would spill onto the streets.

In those days, the Sando was playing free live music seven days per week, with various residencies. Louis Tillet (Paris Green and other bands) would play there, so would Tim Freedman (Penguins On Safari); and various Hayes brothers in various incarnations: Tuesday nights had the Gruesome Twosome: Bernie and Stevie Hayes doing covers in acoustic mode; the Shout Brothers (Bernie, Stevie, plus a few more) was a great covers band for Sundays. It was definitely downmarket, always fun.

Roaring Jack’s residency ceased. Last time I saw Louis in the old days, he fell off the stage halfway through a song, and someone jumped up from the audience and finished off the set. Stevie worked behind the bar for a while, then as Stevie Plunder formed the Whitlams with Tim; Stevie later took a fatal turn in the Blue Mountains. Bernie Hayes went solo, producing some lovely CDs but little money. Tim (as the Whitlams) made substantially more money although not as interesting musically. Louis took several hiatuses (including a hospital stint from smoking in bed), and the Sando… well, it was eventually gutted, and became a very bland pub full of poker machines. In recent times it’s made something of a return to live music, but nothing like its heyday.

Musically, I think Bernie Hayes and Louis Tillet ended up faring the best. Bernie’s first album was a real treat, and Louis is always great on stage. 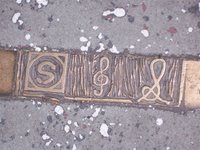 13-jul-06 Update: the above photo is actually the result of me stumbling across a community art project one Saturday long ago. This is my first ever - and only - linocut. At short notice, it was the best local theme I could come up with. The linocuts were subsequently cast in metal and embedded in the footpath across the street from Newtown Station. At least two copies of mine remain, if you care to look. The first S is the Sando's logo in its heyday, and the last is my signature. Somewhat cryptic, but I'm sure a few people would have worked it out.
Posted by S Simmonds at 12:06 pm