If you believe the Sydney Morning Herald, the Australian government has had a sudden change of heart on climate change. According to the Herald’s political editor, this has happened over the past couple of weeks, specifically due to Foreign Minister Downer being persuaded. The triggers were a) the parliamentary undersecretary for the Environment nutting it out with him; b) A number of comments about the unusual weather at an agricultural show in Downer’s home State.

It sounds rather like a bunch of dominoes, doesn’t it? Ready to fall.

Still, don’t expect this to result in sensible policy change. After all, the government had set aside $1 billion on global warming issues, but didn’t even spend $360m of it.

Why was that money set aside at all? My only guess is that it was committed through the political process (either an election promise or parliamentary horse-trading) by a bunch of people who had no interest in doing anything.

Now is not the time for triumphalism. (however, I will refer you to a previous post.)
We need to see useful action, but it's easy to imagine that the government's first moves will fall far short of idea.


Because the Prime Minister remains uncomfortably wedded to nuclear power to this day (see the first article). Why? Now that, I can’t answer. 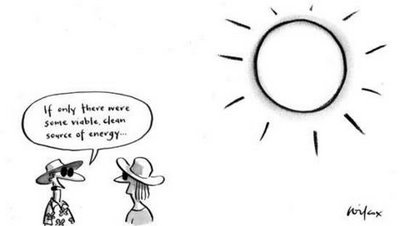 Hi Stephen. In the UK bigger firms pay a tax on their energy spending called Climate Change Levy. All the money raised is put in a fund to give free surveys of companies energy usage and try to avoid wastage. I believe the UK is actually making some progress in carbon reduction and they are aiming above the Kyoto Protocol targets but all nations need to be involved in this.

Bazza,
About 10 years ago, a course I did went into some of the options for dealing with climate change, including things like carbon taxes and carbon exchange credits. I wasn't convinced at the time, but I now see them as useful mechanisms in the panoply of possible responses.

A levy on _all_ energy usage would, of itself, seem counterproductive (in a couple of senses) - unless you were a general advocate of deindustrialisation, which I am not.

It's possible that your Levy differentiates between low- and high-carbon-emitting energy forms. Other possible differentiators could include renewability and pollution.

The response of Australia's government to climate change has been appalling; even China seems to be making some effort at the moment - which removes a major rung from the government's weak argument.

There is a lot that mitigates the economic effects of compliance [with carbon emission reduction], both tangible (there are a lot of growth industries in it) and intangible (ameliorating the environmental costs).