The odds have shortened for a Labor victory this Saturday. The punter's markets are usually better predictors than polls, and they've been short on Labor for some time. A nail in the coffin was one recent bet for $160,000 for a Labor victory, and at 1.2, they're only going to get back $192,000. Still, not bad for anyone with a spare 160k.

I had predicted the sort of form that would come at this time in the electoral cycle. The papers all swing away from blanket support for Howard, the columnists stake their claims for (at least) not being on the wrong side of the public groundswell, and the Liberals start eating each other up. 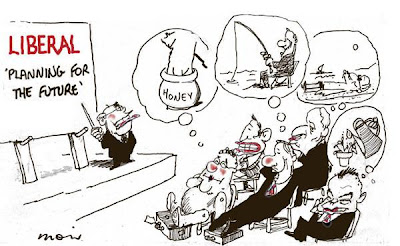 True to form, the Terror (Sydney's only remaining tabloid - a Murdoch) screamed out today "Libs at War". It detailed a (largely old hat) litany of Liberal dissent, from the likes of Malcolm Turnbull (only loyal to his own career) and Barnaby Joyce (making all the complaints). Not to mention ex-NSW Liberal leader Peter Debnam saying elsewhere that the Liberals should have ratified Kyoto.

I had made one more prediction: Howard would make one final recant, to seal his abrogation of principle: a watering down of his much-reviled industrial relations laws. Hardly the time for major new policy, but for Howard, this is not about decorum so much as saving his one dream: to remain Prime Minister.

Meanwhile, I recommend the Poll Bludger website. The comments are becoming particularly lively, whilst heavily weighted to poll-analysis types. And Antony Green often hangs out there at the moment. Look out for him on ABC on election night: there is nobody more reliable in the election game.
Posted by S Simmonds at 10:53 pm