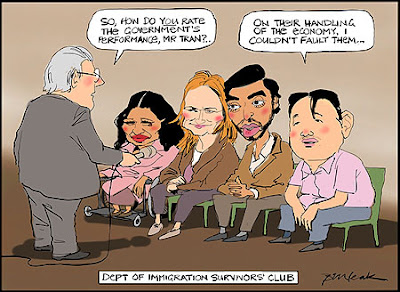 This is a reference to the Tran case, yet another wrongful detention by the immigration department which, under the Howard government, had been markedly over-zealous in its treatment of those they percieved as undesirable.
Those seated, from left to right, would be Vivian Solon, Cornelia Rau, Dr Haneef, and Tony Tran.
This cartoon was published in the Australian today. A rather cutting commentary, and surprising the Australian published it, for two reasons:
1) The Australian - a Murdoch paper - is traditionally a supporter of the Howard government;
2) The Australian has been running a consistent commentary on its electoral polling that the Howard government is seen by the public as better able to manage the economy. As in the above cartoon, touting those perceived economics credentials is rather a clumsy attempt at sleight of hand, whereas all the rest of the Australian's polling shows that:
a) the ALP is significantly further ahead anyway; and
b) the electorate sees other issues - such as climate change - as more vote-changing.