A letter in today's Herald:


What a wonderful delight to be down on Coogee beach this morning for nippers with my six-year-old daughter.
The excitement of 120 children in that age group screaming with delight as the most comical Santa waited for the right wave to surf on to the beach in his inflatable rescue boat had to be seen to be believed - although it was probably heard as far away as the North Pole. It is difficult to imagine a more quintessential Australian scene.
The whole nippers experience is fantastic for kids - from iconic activities such as flag races, to learning more about water safety as the children get older.
It is so much more productive and fun than sitting on the couch watching cartoons because mum and dad want a sleep in. Not surprisingly there is barely an overweight child involved - and they all had a ball.
James Rosenberg Randwick 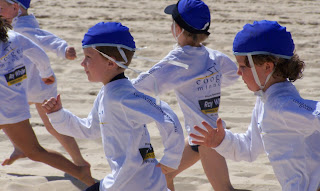 My six-year-old daughter was in that same crowd. However, at the time I was looking after my five-year-old (pictured above) in his group; they sure went wild when they saw Santa arrive from the sea, standing up on a rubber dinghy.
Posted by S Simmonds at 9:50 pm

Email ThisBlogThis!Share to TwitterShare to FacebookShare to Pinterest
Labels: children