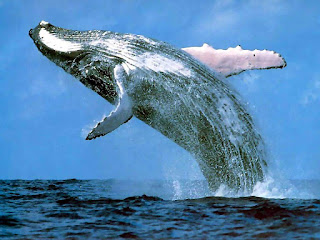 The glib summary of recent events in whaling goes as follows: the Australian government protested and planned to closely monitor Japan's intended humpback whale slaughter. Japan backed down, and announced that in the light of international protest - particularly Australia's - it would not go through with plans to kill 50 humpbacks this season.

There's actually several odd meanderings through this saga; the headline information does not give the full story.

First, kudos does have to go to the new government for taking the stand. It's more than the previous Liberal government did - and in fact the hopelessly fractured opposition remnants seem to be yet divided. On the one hand, Liberal leader Brendon Nelson had warned that the government plans endangered Australia's relationship with Japan; on the other hand, Liberal environment spokesman Greg Hunt had been calling for PM Rudd to do more. Nelson's comments were rendered particularly ironic when Japan's backdown announcement cited the desire to avoid harming relationships with Australia.

However, this may be a pyrrhic victory, for two reasons.

First, on BBC radio I heard from a Japanese activist/journalist. She said that Japan didn't currently have the capacity to kill and process 50 humpback whales, so the announced backdown may have been a way to make political mileage out of this situation. On the other hand, they may have been using the initially mooted humpback slaughter as an ambit, always intending to back away so as to lessen the heat on their other activities - the kill of 950 minke and 50 fin whales.

Second is that planned slaughter of fin whales, an endangered species that may number as low as 5000 in the Southern Ocean.

Nobody can seriously believe Japan's whale kill has any scientific merit. Other BBC reports mentioned a) the profusion of whalemeat in Japanese supermarkets; b) the fact that Japanese scientists weren't publishing any peer-reviewed literature (over the past 20 years of "scientific research" slaughter), and c) a Japanese government spokesman who admitted that the "scientific" kill quota's sole intention was to count the number of whales out there. In this latter report, the BBC announcer was incredulous that they had to kill to find out the numbers (that there were); the spokesman made some bizarre claims about needing to kill them to get their ears, but couldn't put forward a coherent reason for needing the ears.

Outcomes count. Good to see we now have a government prepared to do something.
Posted by S Simmonds at 10:18 am