Stephen Jay Gould's book Wonderful Life is subtitled "The Burgess Shale and the Nature of History". Its twofold perspective discusses a) The Burgess Shale, an extremely fertile lode of fossils from the Cambrian period (characterised as an "explosion" of new life forms), close to the dawn of multicellular animal life; and b) the history of scientific thought on the Burgess and on Cambrian life.

It's a great read - one of my favourite books of the last year. It provides much insight for the general reader into evolution and the history of life, although I have to say that much of what it says makes much more sense after having read a fair bit of background on biology and evolution. 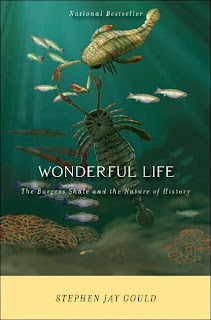 In this post, I will give an outline of the book; in subsequent posts I will comment on some specific issues raised.

The first chapter gives some background on evolutionary thought - more specifically, it goes some of the popular conceptions and misconceptions of evolution. Gould is particularly disparaging of the common depictions of evolution as a series of progressively more complex beings, culminating with humans as a pinnacle of achievement.

The next chapter places the Cambrian period in the context of Earth's history, but more specifically gives some background on the discovery of the Burgess Shale.

The following chapter, comprising the bulk of the book, traces in detail the history of scientific discovery from the Burgess Shale, and in particular the early scientific mis-steps in analysis of the life forms represented by Burgess. It brings us up to date (specifically, to 1989) on the current consensus of scientific opinion on a number of animals that were originally represented as arthropods (the phylum containing diverse animals such as crustaceans, insects, spiders and trilobites). It specifically recounts the reconstruction of a number of very odd creatures - and includes a number of very good illustrations of those creatures made especially for this book.

However, the journey - for me at least - reaches its apex with the final, fifth chapter, in which Gould synthesises a number of lessons learnt from the study - particularly via some of his own research in several earlier papers. This chapter outlines a number of significant insights, discussion points - and contentions that are or should be contentious at least. This chapter provides much food for thought, which I hope to canvas shortly.