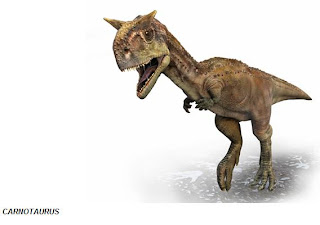 I picked up a recent copy of National Geographic today. Splayed on the front was the caption BIG BAD Bizarre Dinosaurs, accompanied by a picture of one.

The story inside discussed some new dinosaur finds from China and Argentina.
Reminds me of when I was going through my small collection of National Geographics to index all I had regarding evolution. I noted an article on a new dinosaur find, "Archaeoraptor", in the November 1999 issue.

However, I remembered something from an essay by Stephen Jay Gould, and looked up his 2002 book I Have Landed (his final, posthumous volume of essays).

Sure enough, it mentioned a scandal when National Geographic was sucked in by a fake Chinese "Missing Link" avian-type dinosaur. Wikipedia details that fraud.
In short, the specimen was put together for fun and profit from two different fossils. The duplicity was noted twice before National Geographic published, but they hadn't done their verification and went ahead.
They apparently published a retraction in October 2000 - which edition I did not have.
National Geographic is not a peer-reviewed publication. Although it aspires to the scientific, it is more akin to popular press in this respect.

Evolutionary theory advances rapidly these days, and it is important to keep up. However, I recommend sticking to articles that reference respected academic papers, and outside that stricture take the popular press - including NG - with a grain of salt.
Posted by S Simmonds at 10:22 pm