Australia day on the Central Coast. At night, I heard some people talking complaining about that crowd at the surf club; it wasn't even licensed, and why weren't the police doing anything. Conversation turned to general hooliganism in the region (Central Coast - there can't be too much to do for young people). One bloke was talking about Aboriginal riots in Redfern and Lebanese riots in Cronulla, and saying we shouldn't let them in to the country in the first place. Not mentioning that Aboriginals got here first...One said we voted in Kevin Rudd, and he hasn't done anything... someone else said to give him a chance, he's only been Prime Minister for a few months. Later a drunk bloke wandered by from the surf club, draped in an Australian flag; he said he'd been there all day... he was loosely tolerated by the people he started talking to (while his mates were getting some takeaways).

Kevin Rudd had made some Australia day speech about us being lucky to a vibrant, young country; in citizenship ceremonies around the country, people agreed. 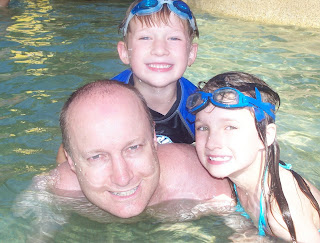 Meanwhile, my Australia day was rather typical:Going to the beach; playing in the pool with the kids (a large beach ball with an Australian flag design bounced around in the water); watching the cricket with a beer; eating a sausage sandwich & dipping a lamington while a bloke played Highway to Hell (decidedly un-hellishly); watching The Simpsons Movie.

The kids loved the pool best.

The Herald's editorial was on the republic. It began: "AUSTRALIA Day may not be the best day for critical thinking. It's OK for beer, barbecues, beaches and, of course, shameless self-adulation. It is a good day for congratulating ourselves on who we are and what we have achieved. Self reproach is not so welcome. Yet how can we escape it when 220 years after Governor Phillip first raised the Union Jack in Sydney, it is still flying above our heads? What happened to the Australian republic?"