The current financial meltdown has provided soapboxes on the BBC and other news sources for all manner of "analysts"/"commentators". To paraphrase some I've heard in the last few days:

"Everything will be hunky dory once the US banks have all released their results. Then everyone will know the extent of exposure to sub-prime debt - it will be quantified - and the market will settle down". He was either bignoting himself with extravagant claims or, more likely, trying to talk a little calm into the jittery markets. As if that quantification will calm the nerves of goold old bipolar capitalism. More likely to send the markets into fresh spirals, in fact.
This is where numbers meet emotion head on. It is _not_ a rational business; markets thrive on self-perpetuating sentiment. 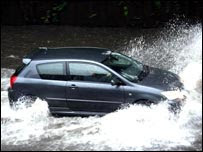 "It's a crisis of credit." Possibly a more apposite comment. The world now runs on inter-linked credit, and that's where it all started: with the packaging of high-risk (sub-prime) loans with other standard debt into inscrutible financial instruments which nobody really understood. Those instruments were spread out (sold) onto the global market before the risk factors started unravelling - that is, low-documentation (and thus high-risk) US borrowers started defaulting. It's exactly akin to a contagion in its incubation period spread around a financial world that is more tightly interconnected than ever before.

So all the capitalists have caught cold. (Australia's sharemarket closed down each day for over two weeks solid, including the biggest one-day fall since September 11 2001).

But it's no laughing matter for the average punter: we're all capitalists now by default, since so many of us have their superannuation at stake. But is it time to worry? Not really: all you need is perspective. This chart will demonstrate that in a historical context, these earthquakes are just blips.
And so the US fed dropped interest rates by a whopping 75 basis points (0.75%) - while meeting outside their regular schedule, on a public holiday to boot. One commentator said this was against the script - it wouldn't have happened in Greenspan's time.

Which may not be a bad thing - it seems to have worked for the moment. The Australia market is recovering, although some say it's too late to avoid a US recession.

I expect it to provide the markets with a temporary fillip only. But that may be what the Feds are seeking: a pause, while nerves are calmed.

Is it all under control? The US Federal Reserve tries. The EU tries (by releasing swathes of liquidity onto the market). But the game is becoming faster and harder all the time as global markets increasingly integrate; and rules are changing all the time.
Posted by S Simmonds at 5:31 pm