Evolution: In praise of cladistic taxonomy

I have been reading a wonderful book on taxonomy - with a cladistic approach - that positively elevates this discipline with its clarity, insight and interest.

It's The Variety Of Life, by Colin Tudge. Via a survey of all life - at the high level at least - it provides exactly the perspective on biological descent that I've always been looking for. 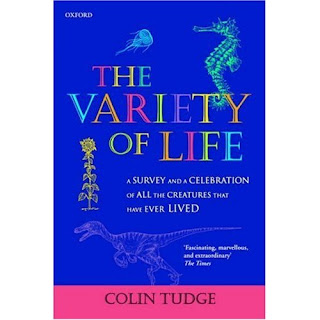 It starts at the highest level, kingdom, and chapter by chapter breaks down all life into taxonomical categories, based on evolutionary history - ie a cladistic approach.


In the normal approach to taxonomy, one can look at the topmost level of life and go on down. The general breakdown of life is:


This gives a successive refinement of all animals, although there are sometimes sub- and super- levels interspersed to provide further refinement.


If you look at animals in particular, you would typically start at the phylum level. That is, dividing the animal kingdom by fundamentally different body types. There's about 32 animal phyla detailed here - although this number can vary widely depending on who's calling the shots, this seems to be a typical number.


Trouble is, most of those phyla are either small and insignificant, or marine. You'd wade through a lot to get to those that would have any meaning to most people on a day-to-day basis - that is, chordates (includes all animals with a backbone, which covers nearly all large animals), molluscs (covering shellfish and snails), and arthropods (mainly insects and crustaceans).


Unlike the typical simple listings of phyla given most places, where each phylum is accorded equal status in the headings at least, in a series of wonderful diagrams this book branches everything gradually from the top level, progressively dividing off the like from the unlike. In that sense, phyla with commonalities are grouped together, and branch off at the same time.


Cladistically speaking, there would be a term for just about every grouping, and these terms are well covered.


The narrative goes into detail about each successive breakdown, discussing all the biological similarities and differences. The book can be traversed as a map, with each chapter providing further diagrams in the cladistic breakdown, accompanied by a narrative that is thrilling in its clarity and enthusiasm.


Each diagram gives a pointer to following chapters that further breakdown the grouping under discussion. Although this navigation method could do with some improvements for those wanting to follow the maps - page references would help to lead from one diagram to both the following and preceding ones, and the full set would benefit by being reproduced in one hit at the beginning - these are minor distractions on what is, on the whole, a wonderful book.


The author is not dogmatic, and fully discusses differences of opinion on how the journey proceeds at each point, without disparaging those whose map would differ.

Thoroughly recommended as a reference book, or as one that can be read from beginning and end - albeit not it one sitting. There's too much life to cover.