I was never interested in astronomy: those patterns of stars never made any sense to me. But recently I spoke to an astronomer, and he helped put a lot of pieces together for me.

Stephen works for the Anglo Australian Telescope, a joint venture between those two governments (although it looks like the English are planning to pull out).

The telescope itself is situated near Coonabarabran, in the west of New South Wales; however Stephen is located in Sydney, sending requests out west, receiving data back, and sometimes travelling out to be there in person. In stark contrast to me, he had always loved astronomy, has a PhD, and seems to be working where he wants to be. he painted several dichotomies which helped me understand the discipline. He was really on top of his subject, so any error here is due to my effort in understanding.

He also clarified for me the difference between optical and radio telescopes. Although I should have had an inkling, I never did join the dots: there is quite a distinction between the two. The first, of course, scans space for what can be seen in visible light, using what we traditionally understand a telescope to be, lenses and all. But a radio telescope picks up radiation in the spectrum beyond ultraviolet light, thus needing non-optical radio receivers to pick up data from space. They're both picking up information from the EM spectrum, but representing and analysing it differently. Radio telescopes can be as in the film The Dish, which has an enormous parabolic dish that concentrates signals to a point which records them. 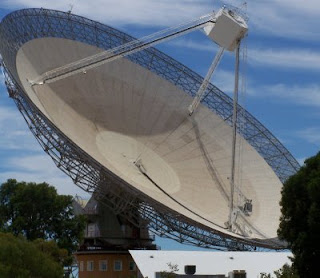 Radio telescopes can also be set up in an array of smaller ones, as in the film Contact - in fact, there is a site in Western Australia that is in the running for global funding to develop an array of dishes that would be one of the largest in the world, running to an area of square kilometres.

Stephen said that, in a very broad sense, optical telescopes took images that represent a (relatively) static view of the universe - as it was at a single point in time (so to speak - the light from distant objects, of course, would date back further in time than that from closer objects). In contrast, radio telescopes recorded data from events - a more dynamic picture being built up of suns flaring, galaxies colliding, black holes, gas clouds, etc. My guess is that images we see that are built from radio telescopes are colour coded to depict the intended narrative that is not otherwise representable visually, whereas optical images may at times be enhanced to also provide clarity to the narrative. Unfortunately, this means some people would be misled into thinking that at a macro level, the universe is more colourful than it really is.

Stephen told me much more about the subject than I have reproduced here, and I am very grateful to him for helping me fill so many gaps in my understanding.

Coincidentally, my family (without me) passed by Parkes a couple of weeks after our conversation, which is why I have this magnificent picture. The dish is 64m in diameter, covers 3216 square metres, and weighs 300 tonnes. Operating frequencies range from 440 MHz to 23 GHz.
Posted by S Simmonds at 10:43 pm