Walking down from the cinema after a Saturday night film, the path was blocked by a 30 cm high bank of dirt that wasn't there two hours ago. That was the first sign for me of a flash storm in the area, which apparently delivered nearly 8 cm of rain in two hours. The dirt came from a hilly construction site; it's lucky the excavator didn't get washed onto the road.

And Dolphin St, Coogee was flooded - it looks like a river in the photo. 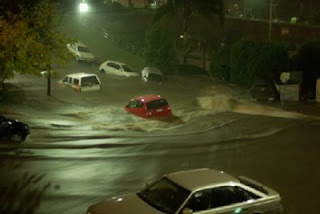 Coogee is a basin surrounded by hills on three sides. It all washes out to the beach. If you go right to the back in the very middle, you'll find a small park (at the end of Albi Place) where a constant gushing sound is heard from a culvet. There must have been a stream there once; the only sign left now is that culvet and a small flow of water out the northern end of the beach.

From that culvet, through the properties between Coogee and Dolphin Streets is a significant gouge. Not the ideal area to buy a house. That depression opens out to Dolphin St, on past the Mount St intersection of the photo. Clearly the path for any deluge; I'm not surprised Dolphin St looked like a river rather than a road. In fact, the side streets to Dolphin (Mount St is in the photo) must have acted like natural river beds too, all feeding particularly to the point in the photo. The bowling and tennis clubs just beyond must have been devastated.

Two days later, and there were still a few cars askew. 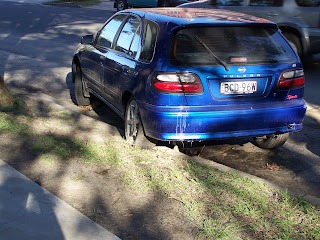 I also looked at the run from Albi Place to that intersection: there were a lot fewer signs of deluge than I expected. Nothing at Albi, and scant leaves and debris lower down. It turns out to be only at that point in the photos that experienced the full force. A resident opposite, Peter, said it almost lapped up to his house, but he'd parked around a side street that night, so his car happened to be safe. He said that it might be a one-in-a-hundred-year occurrence, from what a longtime resident said to him.


Still, if you're living there you may be lucky, and the localised flooding might not recur... for some time... Yet it remains that the biggest threat to that very spot will be climate change. Peter joked that he could eventually have a waterfront property. This was several blocks from the beach... unfortunately, current collective will suggests to me that it will not stop there...
Posted by S Simmonds at 2:40 pm