Different weather: is it climate change?

The jasmine started coming out a few days ago, triggered by a bout of warmer weather. Normally, first out is the delectable scent of the daphne in the tailend of winter in August. The daphne's flowers are starting to poke out, but they are beaten by the strong scent of jasmine. 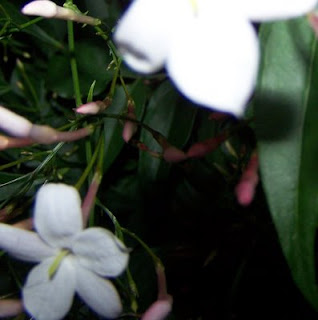 Flowers are a great way to signal the passage of seasons, especially if you have a range of plants that flower at different times.

Last year I noted both flowers were out early - around this time, too. But this year, the order is reversed, and the daphne is slower than the jasmine for the first time.


It's all very well to ascribe changes to global warming (today was the Sydney's hottest July day in 19 years). But there will still be normal seasons and abnormal. And if we take this as a signal, climate change deniers are at liberty to use a hot year like 1998 as their benchmark to justify their position.

(And I say this to climate change deniers. Pin yourself down to a hardline position, if you will. Let's have something clear and unambiguous written down for posterity. Then let's look back in 20 years and see what effect your stance has had by then on your children's world.)

No, one or two anecdotes don't prove a case... but there are already numerous anecdotes the world over (eg, try sheep sizes in Scotland). Yet I'm sure at a local level, if you stay in one place for long enough - and I'd say ten years is enough, at this point in time), you will witness numerous anecdotal changes around you.