The O-Light Project: What happened?

You may well ask, where's The O-Light Project?  One cover so far, and nothing behind it.

Then I discovered the world of Tintin pastiches: others had had similar visions but were better able to realise them, through art. 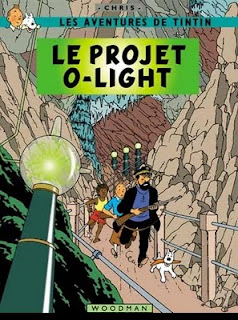 The most faithful renditions were covers of non-existent Tintin books - just like my dreams.  The best of these were executed by a Canadian with the pseudonym Harry Edwood.

Edwood's Le Projet O-Light is my favourite new Tintin book - yet it only exists as a cover.  There are several other good Edwood covers, including Le Rocher Des Kangarous (Kangaroo Rock), in which Tintin finally made it to Australia after Flight 714 For Sydney.

But early this decade, the executors of George (Herge) Remi's estate, Moulinsart, positively stomped on Tintin tributes.  In some senses this was fair enough: some of the pastiches were appallingly executed, and several were downright contre to the spirit of Remi (including the pornographic and the downright bloodthirsty).

Yet this sent the more faithful scurrying for the hills, which is a shame because the best of them are truly worthy of licensing - including several reverent, full-colour renditions of Remi's last, Tintin And Alph-Art - the best and most complete being Yves Rodier's.

More recent searching has revealed that Edwood's Project morphed into none other than The Voice Of The Lagoon.  For which he had already executed several pages - albeit in pencil.  It is set in Madagascar; the early pages are simply picaresque episodes of humour revolving around a diving suit.

Still, the O-Light cover is a brilliant rendition of Tintin, which compels the imagination to open up.


For the best completed work, seek out Rodier's Alph-Art.  The best current site discussing Tintin pastiches is http://www.naufrageur.com, although it helps to understand French.


08-Aug-2012 update: The comment below looks to be correct on the source of the image above.  For the record, here's Calculus/Tournesol Affair, page 31, strip/bande 1 - look carefully:


To be precise, look at the figures in the third image:

Well spotted!  It does seem to be extracted from this frame.  Not obvious at all: the rework is high quality.

From memory, the centrepiece figures in Edwood's Rocher Des Kangarous cover are extracted from somewhere in Tintin In Tibet.  I wouldn't begrudge him this.  The verisimiltude is preserved, within a well-executed background.
Posted by S Simmonds at 10:05 am

The calculus affair on page 31. The first strip on the page is the cover of your book !

I have collected more than 1,000 Tintin covers -- real, pastiche, parody, imitation, fake, and pirate on my web site (www.swapmeetdave.com/Herge/Tintin-cvr-sm/). There is information and photos of the artists as well. Also a contest to design a new Tintin fake cover. I think I have all the Flinflin covers; at least I hope so!


Usually I ignore spams - identifiable by being well off-topic and having links to someone's spam website.

For some reason this discourse was posted to a number of blogs at the same time, mostly off-topic but sometimes on-.

I present it because it's harmless in terms of links, and almost on-topic. M. Daumier discusses not Tintin pastiches but commentators on the authenticity of Hergé drawings. I don't recognise any of the names bar Yves Rodier, but M. Daumier seems to have some acquaintanceship with some Canadians and Belgians who have written on Hergé.