We're lucky to have hit some jackpots in our gardening efforts; the front garden has been particularly profuse in flowers and scents for much of the year, but particularly in spring.


The daphne's come and gone, the jasmine's been out a few weeks (strong and heady), the roses sporadic but rich, and now the wisteria's starting. 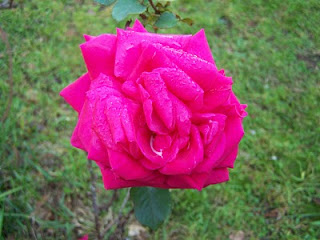 I've been recording spring events for a couple of years now.  Each year brings a few surprises; hopefully a pattern will emerge over time.  Meanwhile, I'm just gathering the anecdotes.

The daphnes have been in the ground the longest, resolute but barely changing from year to year.  They usually turns up late winter, gone by spring; we treasure the scent while it lasts.

The jasmine and wisteria, a few years on, are mature and fighting it out along the front wall, intertwining.  They're both hardy, so I'm happy to let them go for it.  Right now, the jasmine has bloomed and bunched in three separate places: its original location, wisteria HQ, and the arch over the front gate.  Interestingly, neither the jasmine nor the climbing rose are keen on creeping down the other side of the arch once they hit the top.  Right now, the arch is covered with jasmine on the west side (whence it came), while the east (seaward) side has mostly bare woody wisteria. 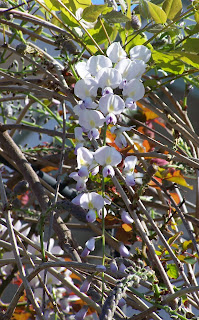 The wisteria is a less common variety around here (Japanese, I think), and it blooms later than others in the district - which are mostly out now.  This year, ours has thrown up a strange few early blooms.  They're notable because they're a) earlier than the rest of the plant, b) white (we had a few of those last year), and c) only turning up on the east side of the arch. I wonder why.  The wisteria extends several metres each direction, nearly everywhere the buds are still quite small.  Except on the east side of the arch.

Why the white sports - and why only on the arch?  Why are the buds so much earlier on the east side?

No complaints, of course.  I've fed and watered these plants to maturity, and they're repaying the effort.  That's evolution - and gardening - at its most rewarding.

A further set of flowering trees were planted in the southwest corner last year, a white magnolia and two michelias ('scented pearl').  The latter are profuse with white flowers, albeit little scent at the moment.  They've taken hold, but it'll take a couple more years before they're really showy.
Posted by S Simmonds at 1:43 pm

Email ThisBlogThis!Share to TwitterShare to FacebookShare to Pinterest
Labels: gardening

Hi Stephen. It's seems odd to read about the onset of spring while in the UK days are shortening and the air is turning autumnal.
Your front garden sounds lovely; any chance of a picture? Lots of London houses are paved over for parking at the front.
The lack of greenery is apparently starting to affect the water-table.
When we did ours I put in four large seperate areas for flowers and shrubs.
We have a base of London clay soil so certain things can't grow such as rhododendrons. Our soil is at one end of the pH scale but I can't remember which.
Do you have that kind of problem?

Here, too, quite a few of the houses are paved at the front.

We're a 10-minute walk from the beach; the soil here is quite sandy, so we have the opposite problem. All our compost goes into the garden, but there's inevitably a lot of leaching. Also, the ground doesn't hold moisture.

Thus my gardening successes are due to the amount of compost, while the failures are due to insufficient watering.

Hi Stephen. I have given your blog a mention in my latest post.
Bazza’s Blog ‘To Discover Ice’