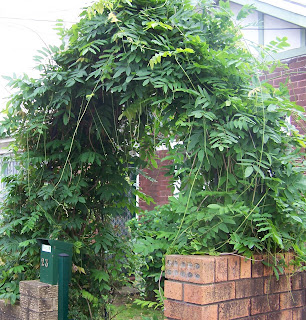 Today was quite rainy.  In fact, mid-spring in Sydney was a wet time, and the coolest October in 18 years (see the full report in the Herald).  We're not doing too badly - Melbourne's been mopping up after a season of floods.

On the other hand, the drought has finally broken.  For the first time in (fifteen?) years, no region of New South Wales is officially in drought.

What has the weather done to the garden?  The wisteria's flowers were very subdued this year, not only brief but a much smaller display than usual.  On the other hand, once the flowers are gone, the leaves burst out in force, and tendrils shoot everywhere.  Post-bloom, it's been lusher than ever. 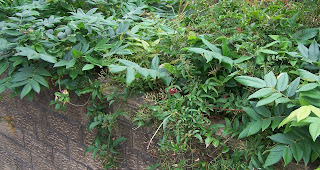 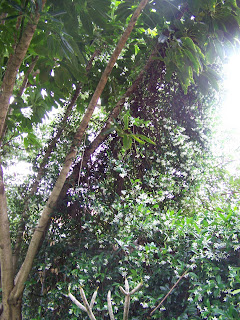 Out the back, the star jasmine has been out for about a week, a very heady smell when the temperature goes up.  However, it's been pretty mild this year because of the cooler temperatures.  Still, the jasmine is growing, and as you can see, it's been climbing the umbrella tree.  This year, it's particularly dense in the upper reaches.

What does all this mean for climate change?  In the short term, it's hard to tell.  Over the years, this journal can help record the changes in flowering patterns.  Anecdotally, the easiest thing to say is that there's been a marked volatility in the past few years.
Posted by S Simmonds at 10:15 pm

Looking at your front garden is like looking at an English garden gone slightly exotic.
The words that come to mind are 'lush' and 'verdant'. I would suppose that even a poor summer in Sydney sees a lot better weather than London does. Even so, hotter summers are expanding the range of what we can grow. There has been conjecture that global warming would see cacti and orange groves appearing and that the end of the English Country Garden is nigh!
Bazza’s Blog ‘To Discover Ice’