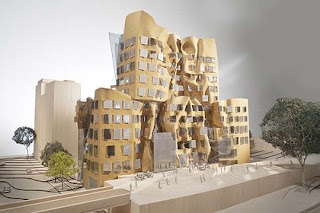 As part of a continuing series on Sydney's future, here's an image of the planned UTS business school building, designed by architect Frank Gehry.  More details and more pictures can be found here - including the back facade, comprised of "large, angled sheets of glass".

This is the second startling building plan I've seen released by UTS, the University of Technology, Sydney.  The first, an engineering faculty, can be seen here.

The other visions of Sydney's future are rather less tangible, more costly, and politically difficult:


By way of contrast, there are some visions of a Sydney that never will be: alternatives for the Opera House (here and here), an opera theatre 'appendage' to the Opera House, and an alternative harbour bridge.
Posted by S Simmonds at 1:22 pm

Hi Stephen. Is this a building that is definitely going ahead or just a proposal? It's one of the most amazing designs I have seen. If the building was faulty and started to fall apart, how would they ever know?
May you and all of your loved ones have a wonderful Christmas and New Year with best wishes from Bazza of ‘To Discover Ice’

As far as I know, the UTS buildings are quite definite. The sites are there and available - this one's a car park, and the other's going to be on a large site that was a brewery and is now a huge urban renewal project.

I have my doubts about the others. Circular Quay and Town Hall are part of the City of Sydney's longer term plan. I think they're great, but too high on the ambition factor. I actually work opposite the town hall plaza site, and could watch it blossom - but I'd probably be retired by then, if not dead or hell frozen over.

The opera house theatre is a proposal only; I don't think it will happen. But the 3D model (via the link) is fun to watch.

It's a sad day when breweries are being turned into urban renewal projects!

Don't worry Tom, the beer's still flowing in Sydney, I can vouch for it :)

Merry Xmas to all.