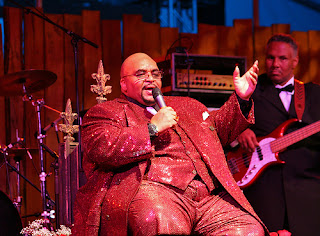 Solomon Burke, 1960s US R'n'B singer: Notable for songs like Everybody Needs Somebody To Love and Shake Your Tailfeather.  Surprisingly, he held a record for the most US Top 40 singles without hitting the top 20 (see Joel Whitburn).  And he had a career revival a few years ago, with his star-studded Don't Give Up On Us album.  But his best legacy is his live shows.  In Sydney a few years ago, he didn't move from a centre-stage throne.  But he gave us a truly wonderful secular gospel experience, one of the best concerts I've ever been to - an inspiring demonstration of the spiritual unencumbered by religion.  He will not be forgotten for that.

Joan Sutherland,  Australian opera singer: some say one of the best of the 20th century.  I can't say I've taken enough time to appreciate her, but what little I've heard gives me some indication why she was so warmly regarded.


Richard Holbrooke: Abrasive US diplomat who was, nonetheless, widely praised for his intelligence and abilities.  A notable example of his success was peace in the Balkans.

Tony Curtis, US actor. A significant presence in the 1950s.  Of the films he appeared in, easily my favourite is the biting film noir Sweet Smell Of Success.  Seek it out.


Leslie Neilsen, Canadian-born Hollywood actor: has a successful later career in comedy films such as Naked Gun.  Others put the words into his mouth, but his straight delivery was his own: simply marvellous.


Teddy Pendergrass, 1970s US R'n'B singer: must get a mention for his so-soulful lead vocals on all the hits by Harold Melvin and the Blue Notes, including  If You Don't Know Me By Now, The Love I Lost, and Wake Up Everybody.

Peter Graves: An icon of the 1960s tv series Mission Impossible.  It wouldn't be the same without his Jim Phelps.

Others that could round out a 10 include J D Salinger, Lena Horne, and Dennis Hopper.


One apparent demise in 2010 that will not be missed: people now seem to be saying twenty-ten, twenty-oh-nine, etc, instead of two-thousand-and-ten, two-thousand-and-nine.  Once again, I'm no longer out of step with the mainstream. :)
Posted by S Simmonds at 12:50 pm

Email ThisBlogThis!Share to TwitterShare to FacebookShare to Pinterest
Labels: obituary

Hi Stephen. I would add to that list Norman Wilson, my early childhood idol and a natural clown.
Incidentally, I read that another founder member of Harold Melvin and the Blue Notes, named Bernard Wilson died last week.
Joan Sutherland's passing is well worthy of note.
Also my favourite film of all time is Tony Curtis's Some Like It Hot.
Happy New Year from Bazza of , ‘To Discover Ice’

Or, if you prefer, Norman Wisdom.

However, my only knowledge of him is that he's English, and an entertainer. What specifically do you remember, Bazza?

He was a Chaplinesque cinema clown, and Chaplin's own favourite.
He died very recently aged 90 something! Most of his best work was in the 50s and 60s.