Brain Pruning: the answer to autism?

"In adults [the human brain] has perhaps 100 billion neurons, each connected to its neighbours by 5000 synapses or so." New Scientist, 1 October 2008

"In the f[o]etal brain, all parts of the brain are interconnected, but as we age, the connections are pruned.  If the pruning genes get it wrong, the connections are off." - according to Vilayanur S Ramachandran, in New Scientist, 8 January 2011 (The fastest brain in the west, p26)

There is no disputing that the human brain undergoes a pruning process whereby the synapses, the connections between neurons, are culled while the brain is developing. 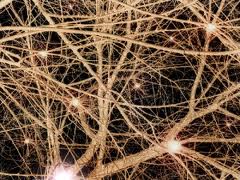 This is a normal part of the development process: meaningful connections are retained, and [at least some] unused ones are discarded.  This is a rationalisation that begins before the baby is born and continues for years afterwards.

And it's those synapses that enable brain functionality, particularly connections between different areas, which facilitate all manner of associative thought and reasoning.


The second quote above was made in the context of neuroscientist Ramachandran's study of synaesthesia, the leaking of one sense into another (the most common example being seeing letters or numbers as specific colours).

Occam's razor says to me that it need not take Ramachandran's concept of "pruning genes" for the pruning process to go awry. Development both before and after birth are affected by quite a range of factors.

Yet it struck me that disruption to that process may account for high-functioning autistics [so called "savants"] in particular.  The ability of Daniel Tammet, for example, to recall thousands of digits by visualising the string as a rolling landscape - that sounds like abnormal connections remaining in place between disparate parts of the brain.

Incorrect pruning may account for autism in a wider sense - not just those that are high functioning - but it seems easier to look to that process when describing aberrantly strong functionality than a weakening of capability, which can be due to a much wider variety of factors.
Posted by S Simmonds at 11:53 pm