The consummate private library: The Biltmore

Our library is rather modest. It has grown organically, and so is rather a jumble to look at. There's about 800+ books (and about 600+ CDs), not all of which can fit. Some day we'll have to have to get it done properly, with built-in cases.


On the other end of the scale, there's the Biltmore. 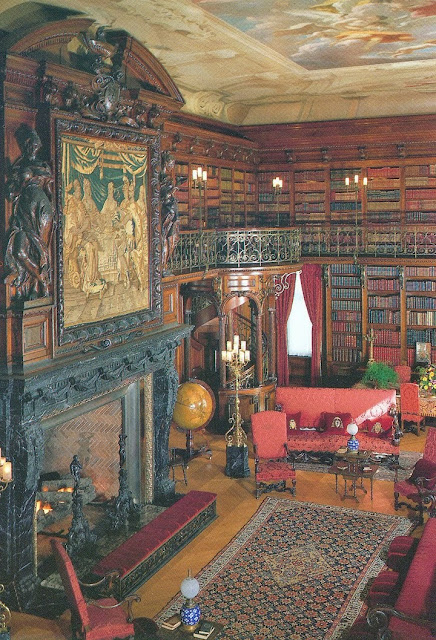 It's the private library we can but aspire to.  Two floors of books in a sumptuous setting of rich carved wood and iron lacework.  An extra large fireplace and a Pellegrini painting set in the ceiling to rival those of the great European libraries.  What more could you want?


To put it in context, it's a Vandebilt holding.  It's in the Biltmore Estate in North Carolina, part of the largest privately-owned house in the US.

The house was modelled in the style of the French chateau, was built over a hundred years ago by a Vandebilt who sunk most of his time and money into the estate - then promptly died.

The books are genuine antiques and rarities, the collection having been built up from the time the house was built.  There are about 10,000 in the room of a total of about 27,000, most of which are in storage.  With the caveat that the original owner was an avid reader and book collector, I doubt that these books ever saw much real use; they certainly aren't handled any more, except to catalogue them, a process that only began properly within the last ten years.  If you're wondering: history books predominate, alongside architecture, art, poems and plays and various other fields.  Many were deliberately acquired in an original unbound state, which would explain some of the uniformity of the volumes.

There is a number of secret panels around the room; the balcony level includes doors that lead to the second-floor bedrooms.

The estate - what is left of it - is still owned by the Vandebilt family, and open to the public - there's even a conference there, on Data Governance, later this month.  I wish.

In lieu of visiting there in the near future, here's hoping someone can stitch up the photos into a good VR panorama...
Posted by S Simmonds at 11:05 pm

That house is 'builtmore' than most others! OK, I won't give up the day job. The library looks sumptuous and well worth a visit if one is anywhere near.
I have been on a conducted tour around Breakers, a Vanderbilt mansion in Newport, Rhode Island which is spectacular.
Biltmore reminds me of another huge (once) private house I have visited: Casa Loma in Toronto, Canada, which was also the largest house in north America at one time.
Thanks for an interesting post.
Bazza’s Blog ‘To Discover Ice’