John Buchan and the publishing game 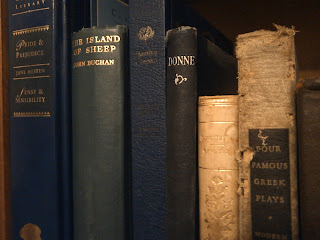 Having bought a few old books lately from various sources, I can say that the best place for a good browse and treasure hunt is the yearly university book sales, UNSW in May, and University of Sydney in September.  While some vetting happens, it's not high level, and you can easily expand your library if not seeking something quite specific.

One of books I found at UNSW was a good-looking but undated Martin Chuzzlewit.  But more interesting was an early edition of a lesser-known John Buchan book, The Island Of Sheep.  Haven't got far through it yet, but it's looking to be a good, if measured, read.

In preparation, I re-read the novel he is recognised for, The Thirty-nine Steps.  (Alfred Hitchcock made a famous film of it, which bore a passing resemblance to the book.)

The edition I had was a cheap paperback, with noticeable typos.  Some revealing examples are 'unde' for uncle and 'tbe' for the.  Those are not typical errors of the human finger: it's clear the publisher obtained an out-of-copyright edition, scanned all the pages, then obtained the raw text via Optical Character Recognition.  The sensible thing to do - probably what most publishers do to avail themselves of copyright-free material.

Later, when I was wandering through Kinokuniya, the bookshop at the bottom of the building in which I work, I saw they had about six editions of Thirty-nine Steps (and all his other Hannay-protagonist books bar Island Of Sheep, which shows how obscure it is).  Why so many different editions?  My guess is that they buy job lots of books from various publishers, and find they end up with multiple editions of the same one.

Incidentally, one of those editions looked like a very crisp reproduction of the original, complete with irregularities of type.  Cute, and not a burden to read.  But none of them featured the egregious errors found in my copy.  Those publishers must have put more effort into proofing the OCR work.  Moral: beware the cheap editions and avoid them.  I think it's worth naming and shaming them: the imprint was Wordsworth Classics.
Posted by S Simmonds at 9:11 am

"If you liked that you'll like this...."
The Thirty-Nine Steps is a great read and if you enjoyed it you would probably like Erskine Childers' The Riddle of the Sands a similar genre of a similar era.
Click here for Bazza’s Blog ‘To Discover Ice’

Thanks for the ref, Bazza. That one looks to be a landmark novel.

By the way, The Island Of Sheep is no slouch either. I'm only up to chapter 3, but it's already clear that Buchan's writing had quite matured over 39 Steps.