John Buchan's guide to being a monarchist 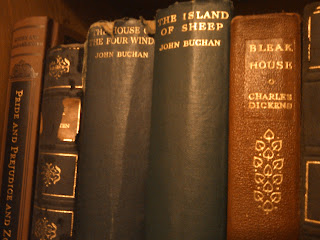 1.  First, get yourself a copy of John Buchan's The House Of The Four Winds (1935, Hodder & Stoughton). First edition preferably, and a little ragged, to prove that it's a well-used, well-regarded tome.

3.  Your enemy is the republican.  He's a venal, ugly ratbag - and his manners are appalling.  But he will be no danger: he will inevitably die of the violence that he himself instigates.

4.  Republicans are "shadows of the dark which vanish when the light comes", "hating what they did not understand".

5.  Communists are, of course, beyond the pale.  Risible at best, they are not even worthy to be considered as foes.

6.  Commandeer a catchy refrain for the monarchists to pass secret signals to each other.  Dvorak's Humoresque, say.  It helps if your daughter's been learning this piece on violin, so you'd better get her started pronto*.

7.  In a monarchy, "everyone will share in its government... all will be sovereigns, because all will be subjects".  ...Oops, that abrogates #2, better drop that.  Pretend it's a mere trifle you picked up at Cambridge.

8.  There's no dishonour in recruiting the services of foreigners for a bit of legerdemain at strategic junctures.  Particularly if they're of good breeding.  Or Scottish.

9.  To further cement your legitimacy, join forces with (ie subvert) a populist organisation that actually has a wide power base.  Something along the lines of a Hitler - oops I mean German - Youth Movement.

10. Finally, and most resoundingly: monarchs are, of course, handed their office by the simple mechanism of universal acclaim.

Wow, Stephen, you've moved into the field of satire. Aussies would have been criminals or sheep-shaggers I suppose! What fun! I think it must have been some sort of benign hegemony in those days.
Click here for Bazza’s Blog ‘To Discover Ice’

Satire? That's a bit shabby. Are you a communist?