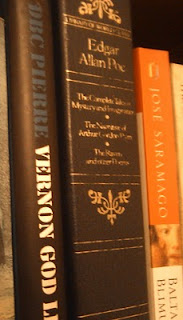 Poor Theodore Dalrymple!  He clearly feels the weight of the world on his shoulders.  He exhorted all who are concerned with the preservation of civilisation to shrug off the chains of conformity and denounce Vernon God Little.

The preservation of civilisation is at stake??  God help us, that's more the province of backwooders from centuries back who felt the black wilderness pressing in on them, threatening to engulf all who aren't making their final stand.  But with Ted, it's not the dark fang and claw of nature that threatens, it's the hideous beast that is the Booker Prize winner.

More informative was the reviewer who summed up the author thus: "Embrace DBC Pierre's full-bodied, freewheeling technique on the first page or get ready for a thoroughly dislocating ride".

The reviews I've read have been rather polarised; even so, most don't seem to be able to understand why this book was awarded the Booker.

Fortunately, I read the book before reading any reviews, so I wasn't blackmailed by preconceptions.

This narrative being the stream of consciousness of a 15-year-old boy, it is of course utterly replete with the profane and scatalogical thoughts of a very male teenager.

But it's also jam-packed with smells, sounds, flashes of colour and light - especially the smells.  In one sense, it's as if the author was told at a writing course to infuse his work with more of the sensuous, then took it too far.  Yet a simple litany of sense bombardment would come across as rote writing, and this work clearly doesn't - in totality, the words evoke well the atmosphere of the fat, hot, dusty, small Texan town in which it is set.

The moments of tenderness are infrequent but noticeable; they give a keel's balance to what is usually a wild rollercoaster of highs and lows that swing higher and lower all the time.  Even in the prosaic courtroom scene, the reader is battered by peaks and troughs, wave after wave.

I have a couple of quibbles, and they're structural but - paradoxically - minor.  First, the language often tends to soar above that of an ill-educated 15-year-old Texan.  Second, the resolution is somewhat unreal, to the extent that it could arguably be construed as fantasy, and that's a bit jarring.  Yet in another sense, it is entirely in keeping with the "dislocating ride" that spins around the protagonist - and the reader - ever faster.  How could it not be so, right up to the end.

Some call it satire, Ted.  It certainly has that, but I call it funny.  There will be plenty who can't stay aboard.  Those who can are well rewarded by a work that ultimately provides enjoyment and satisfaction, human condition and insight.
Posted by S Simmonds at 11:52 pm

From that well-known 'Commie', Bazza!:
I had no idea what this book was about until now. It sounds like Catcher In The Rye meets Life of Pi. But I don't suppose it is.
I often enjoy stream-of-consciousness reading like Virginia Wolff, John Dos Passos and James Joyce but I feel uncomfortable if a novel is self-consciously experimental.
I am sure this one deserves to go on my (long) reading list. Thanks for the heads-up!

There's certainly been more than one comparison with Catcher In The Rye. It's been a long time since I read that book, so it's hard for me to comment. In some ways Vernon God Little is the antithesis, but it is clearly complementary in many ways. It's not got the hallmarks of a seasoned writer, but it has an immediacy and a timbre that's hard to match.

If you can make it as far as the second chapter, I think you'll find it an easy and engaging read. It's worth it.