Film: Goldstone (Australia, 2016) - one of the best of Australian films

One of the best Australian films I have seen, if not the best, Goldstone is passing through our cinemas and will quickly vanish.  It is ostensibly about a detective seeking a missing person in an outback mining community, but this is one of those rare films where an engaging plot turns out to be secondary to the overall filmic experience. 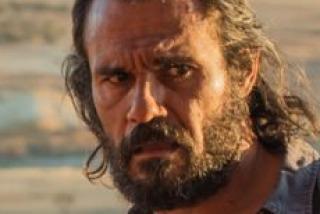 After an unusually deceptive beginning, it is quickly clear that this film has power, strength and unity.  Strength in the dialogue - in particular the silences that respond to the dialogue.  Unity in the sparseness of the landscape which matches that of the dialogue - and the movement.  Power in the bursts of action that punctuate the apparently slow pace - but again, the periods of stillness are an inherent part of the action, a character and a characteristic of the film.

No, the pace is not a weight to be borne, a forced meditation.  The plot stands on its own feet - and in fact the trailer gives the impression it is a full-on action film, but the silences in between have more lasting impact.  It is the visual spectacle, the acting and above all the masterful filmmaking that eventually wins over the audience.

For what I know, depiction of the various communities and locations have a documentary authenticity.  The locale describes a wide, barren landscape, but gives clear hints that it is only a small part of a far larger, empty country that simply dwarfs its inhabitants.  One of the techniques to achieve this remains a mystery to me: the occasional aerial shot that is impossibly high and still.  Never seen anything like it.

There are outcomes rather than resolutions.  Many things in life don't have satisfying conclusions, but the film respects its audience enough to neatly tie up some of the loose ends.

The indigenous lead is Aaron Pedersen, who I recognised from a support role in Jack Irish, a competent set of detective telemovies located in urban Melbourne; here, he has the opportunity to shine, in an understated manner.  He has an impressive portfolio of work in tv and film.

I later found that the director was indigenous filmmaker Ivan Sen; and that this had been his second feature to lead off the Sydney Film Festival; although it is characterise as a sequel, it is not strictly so, and is standalone.  Despite the accolades, I expect Goldstone to sink with little trace, simply because people are more acclimatised to Hollywood and its industrial-strength capital.  There is no solution, save to seek out this film while you have the opportunity.
Posted by S Simmonds at 11:56 pm

I tend to enjoy Australian films for the reasons outlined here. I like low-budget films without a stellar cast. Your description puts me in mind of Paris, Texas, an excellent film. Incidentally I think Jackie Weaver is an actress we don't see enough of; she doesn't seem to age does she? Do I remember her being in a film set in Melbourne when she was the mother of some bad boys and a nephew comes to stay with them when his mother dies?
CLICK HERE for Bazza’s fabulous Blog ‘To Discover Ice’

Bazza,
Sounds like your're on track for knowing more about Jacki Weaver than me! Most of what I know is that she had an infamous husband (less said the better).
The actors in this film were certainly competent, but the lead, Aaron Pedersen, was particularly good.