Evolution: The sins of Cladism

I came across the term "cladist" as a term of derision, or at least "other" or "out there".

A clade is a "group of organisms evolved from a common ancestor" (Concise Oxford, 1988). [Interestingly, it's solely "a disaster, or plague", according to my 1933 Shorter Oxford; my Encyclopedia Britannica, 1974-88, doesn't acknowledge the word at all - which shows how recent this use is.]

Cladism is the branching off of species successively by "shared derived" features. Stephen Jay Gould describes cladistics as a "theory and philosophy of taxonomy" (with a history longer than the Britannica admits), about which he calls himself agnostic (p254).

However, Gould does find a great virtue - and some vices - in it. He describes a tradition of depicting evolution as a succession of improvements: we've all seen pictures of a parade of creatures, from fish to amphibian to landed reptile to mammal to primate to human. Gould's problem with the traditional approach is that it portrays humans as being at the absolute pinnacle of a succession of changes: here it goes, and no further. Any other evolutionary form is irrelevant: anthropocentrism rears its ugly head again.

Yet there have been changes, speciation, clades evolving subsequent to our own branching off. A cladogram is a diagram that depicts those changes by successive branchings on key characteristics. I find such a diagram can be somewhat arbitrary in terms of the species portrayed, but it can give a good feel for how speciation (the splitting into different species) can happen. 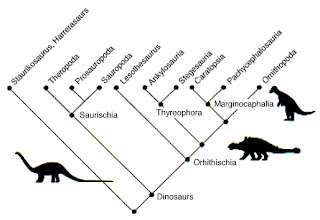 Gould's example from a museum depicts the following key branchings: synapsids, middle ear bones, placenta, stirrup-shape stapes, hooves, eye socket near the snout. On such a diagram, humans branch off just before the hooves, while the last group includes sea cows and elephants. Noteworthy is the little-known fact that whales branched off from ungulates - ie their ancestors had hooves!

So a cladogram can be more instructive - and realistic - than tradition preaches. But Gould's reservations on this are that it ignores: a) unique traits evolved by single lineages; and b) trends in groups that don't lead to branching.

This is a tool, though, a useful one but just part of a toolkit. I think it has useful instructive value, but I have a couple more problems with it. First, this "assessment of morphological characteristics" (Viking, p27) can ignore the fact that separate branches of life's evolutionary tree can evolve similar features independently. For example, whales are mammals, but share many outwardly similar features with fish. Sharks too, although they branched earlier. And memory tells me that there were at least two different branches of fish that separately developed the similar body forms that we know so well.

Secondly, such depictions are easily subject to substantial revision, in particular due to DNA/RNA analysis. Species that appear to have branched off together have been found to be far less related than external features suggest.

Sterelny, a Gould champion, confirms my misgivings in pointing out that true cladists would acknowledge mammals in a common clade from a shared ancestor, but wouldn't refer to reptiles at all, since there is no single leap-off point (p103).

Cladograms are useful, but subject to revision. Much of that revision will originate with DNA analysis, but that's only part of the story; fossils are not suceptible to this (Jurassic Park notwithstanding), and for that we need paleontologists such as Gould.