Where is the danger in creationism?


Yesterday I had the privilege of talking to a couple of creationists face to face.
They had set up a stall at the Surry Hills Festival. One said he had a degree in philosophy; the other had not done any post-secondary school study. If I recall correctly, both said they had studied evolution for decades. At least one was well aware of Stephen Jay Gould's paradigm-shifting work on punctuated equilibrium.
It's is ipso facto hard to gain traction in a discussion where the perspectives are pretty much orthogonal. Perhaps with more thought I could have established more points at which our perspectives overlap, and can agree or disagree.
They both cherished the fact that their perspective was published in peer-reviewed journals. What journals? "Journal of Creation". Who are the peers? Creationist scientists. (You may view that as oxymoronic, but they adhere to scientific method to a degree. At what stage it becomes non-scientific is a matter of disagreement.)

Of course, their viewpoints aren't given scientific credence, and specific examples wouldn't survive peer review in the wider, fully scientific community.
Or would they? 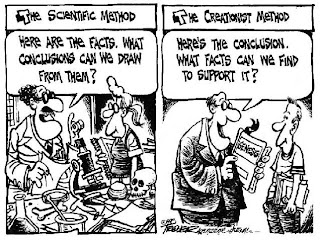 Three cases demonstrate some of their limitations.

The first is a finding by Mary Schweitzer of blood cells and soft tissue with a Tyrannosaurus Rex bone. Now it made absolutely no sense to me that this could be, but one of the creationists said it demonstrated that dinosaurs didn't die out as long as 65 million years ago. I asked what was the science community's response to Schweitzer's finding. He said they rejected it because their mindset couldn't handle it (well, he would say that, wouldn't he?)
I asked what it said on Wikipedia, but he didn't trust Wikipedia. I looked it up when I got home. In fact, it said Mary Schweitzer characterised herself as a "complete and total Christian", but that she resented Young Earth Creationists hijacking her work, and said they "twist your words and manipulate your data".
(I remain blown away by her finding, and will make further investigations.)

The second example was the Peppered Moth. This is the standard biology textbook case of the moth in England during the industrial revolution, which started out a light colour, but the successful mutations were the ones that had darker colouring, and so were better camoflaged against predators in an environment that rapidly became dirtier, darker, more polluted. The creationist said that Kettlewell was the bloke who made that finding, and his results were subsequently shown to be fraudulent.
Apparently, it is accepted that there were "errors and oversights" in his work. But crucially, subsequent study has confirmed the findings.

Thirdly, discussion came to global warming. The creationist admitted he hadn't formed a viewpoint yet, but noted that a judge in England had found eight errors in the film An Inconvenient Truth.
This brings me to a central issue in the politicised climate of the global warming debate. If there are errors, are they sufficient to invalidate the whole conclusion?
In this case, the answer is no, of course, but the general lack of understanding of scientific method is specifically what enabled vested interests to cruel the general population's appreciation of the urgency of the issue for the past twenty years. Twenty years in which action could have been initiated before it is too late. And it is too late, in the sense of the recent findings that carbon emissions to date are already sufficient to raise global temperatures. Whatever action we take right now.
Al Gore ably demonstrated the gulf between the understanding of the scientific community and that of the wider community, when he noted that in a survey of hundreds of peer-reviewed scientific literature, not one paper doubted the issue was real, whereas over 50% of media articles surveyed included expressions of doubt.
This is why I have a serious problem with creationists. The general lack of understanding of scientific method has hampered action on a world-changing issue. At the most generous reading, creationists' selectivity in the use of science, and lack of commitment to objectivity (which - in totality - is key to the advance of scientific knowledge), have only served to perpetuate a level of ignorance that has been very damaging to the world.
I return to the comment in New Scientist that the beauty about science is that it doesn't matter what you or I believe, the world is as it is. Scientific method, over time, uncovers that truth. Creationist dialectics helps keep the truth at bay.
Posted by S Simmonds at 12:09 pm