At the Museum of Contemporary Art one rainy afternoon, I encountered one of the more unusual films I've ever seen.

Made by British-based video artist Christian Marclay,  the premise of The Clock is very simple: it's a montage of a large number of segments from various films (mainly Hollywood) where someone looks at a clock (or watch).  Moreover, it's been edited to show the time in real time - and it covers a full 24 hours.  Yes, that's how long it is, and you will normally find it scheduled to show the time in real time.  Which means over time, you'll carry an awareness of the current time.  This is a unique  breach of the fourth wall - that is, the film is constantly reminding you you're in real life.

The concept iself is quite neat.  But in fact, it's more than that, because the editing is good, and there is a certain coherency to it.  In some ways, it's the coherency of an mp3 player on shuffle, where the music gradually assumes a kind of sameness, a melding.  Yet in other ways, there is a feeling of something happening - or, often enough, something on the verge of happening. 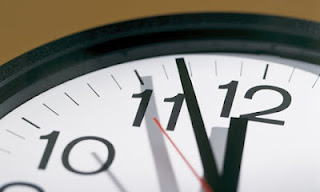 And then the action moves on.  Another act in the "narrative" takes over.

As such, it maintains a rhythm: a steady rhythm, a post-modern one, which can perhaps get somewhat monotonous over time.  If you watch it long enough.  Or does it become meditative?  After a while, would you settle into the rhythm, find the constant time-check irritating, or be frustrasted by the "almost" nature of the action, or the lack of real continuity?  As it stands, I had to go after 35 minutes, but that wasn't quite enough to lose faith, and I was left wanting more.

Unsurprisingly, it looks like the most popular venue for this film is art galleries.  An experience more than entertainment, still escapism - but only to a point.  Because there's the steady tick ticking of the clock...