Word of the Day: Ungulate

Why something as staid as Word of the Day?

It arose from a comment someone made to me about a man of letters who made a habit of learning a new word every day.  I don't remember who that was; I'm sure there's a lot of people who have made such a resolution over the years.

But it struck me that I don't need to make the effort, because I encounter at least one new word every day.  If nothing else, in my readings on history, science, evolution and genetics.  It wouldn't be hard to document just one per day, and it would oblige me to properly find out what it meant.

However, the exercise is not without its pitfalls - not the least of which is the interruption in the flow of reading, the communication of information.  Not trivial when I'm deeply immersed in a train of thought.  Jump off that train, make a note, catch it again, recapture the meaning and the mood.  Later, I have to fit in the time to do the research and write it up.  Not always trivial.  In fact, since I started this, I realise I have a bad habit of glossing over new or half-understood words.  I find I'm not picking up half the candidate words - there's just too many.  In general, I'll try to make them totally new.

And so the second question: Why something as staid as ungulate?

Well, there will be days like that.  For some of these words, I didn't know the full meaning or nuance; for others, it makes sense to be clear on the understanding of a word that's needed for another word.  Like this one. 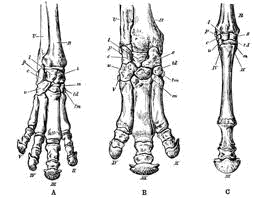 Do you know properly what this word means?

Of course, an ungulate is effectively a hoofed animal, but the word refers to a specific grouping of mammals. They move on the tips of their toes, which have hooves. (they'd be good at ballet, hey?)

There are odd- and even-toed ungulates, which actually delineates which toes the animals rest their weight on (some of the toes are quite vestigal, and so barely visible).

Despite what wikipedia says in its intro, this is not a proper cladistic group of animals. That is, the word does not describe a grouping of a single ancestral animal and all its descendants. Otherwise, you'd have to call dolphins and other cetaceans ungulates, because some ungulates are closer in ancestry to cetaceans than they are to other ungulates.

So this word is not very helpful scientifically - despite which, I'm sure some biologists use it informally to communicate meaning to a general audience.

Where did I (last) encounter this word? I found it integral to the next word of the day - it helps to understand this one first.

Hi Stephen. I once tried to make a point of learning a new word everyday but, as you rightly say, one usually comes across a new word without searching! I must admit I thought it meant the same as 'ruminant'! Thanks for the enlightenment.
By the way, we are going to Australia this November; Sydney, Cairns and Melbourne. Can't wait!
Click here for Bazza’s Blog ‘To Discover Ice’

The analyst in me doesn't like paraphyletic words (reptile is another good example), but it's helpful to illustrate what's wrong with them.

When you come to Sydney, you're welcome to share a drink or two at Coogee beach. Pubs aren't as good as English ones, but James Squire is a great beer.