Word of the day: Microbiome

This is clearly a portmanteau word: microbe + genome. Microbe refers to microscopic organisms - in this case, bacteria; genome refers to the sum total of genetic material in an organism.


There's a community of bacteria living within humans that performs functions essential for human life. Scientific American (Mar-2012) says there's at least 10 times as many bacteria cells as human cells in the human body (but those bacteria are a whole lot smaller, with much, much simpler genome).

So microbiome is the genetic material of the [useful] bacteria in the human body. In such a situation, it differs from human to human, so things like this are usually measured on a sampling basis. 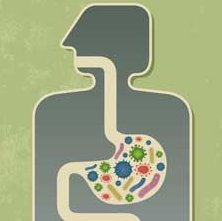 According to that Scientific American article (Backseat Drivers, p11), the sum total of all genetic material housed in a human body is then called the hologenome.


Small bone to pick here. The human genome is generally thought of as referring to the genetic material (23 chromosomes of DNA) housed in the nucleus of each cell. But there's extra DNA not in the nucleus: mitochondrial DNA, used to generate energy, passed on only maternally, and originally passed to humans by bacteria. This DNA is often left off discussion of genomes.  In this case, I'd say they'd be including mitochondria for the sake of completeness.

Another small bone to pick. Microbiome is listed in Wikipedia as the sum total of microscopic organisms in a particular environment, and hologenome is used as an idea of co-evolution with microbes, roughly speaking. So the Scientific American article is pushing the envelope a bit.

So even within a scientific community the meaning of words can change over time until/unless locked down.

Further reading (both from Scientific American, as it happens):

So what's the difference in meaning between Microbiome and Genotype?
Click here for Bazza’s Blog ‘To Discover Ice’

Hmm. That's an interesting question. There's a lot of similar-sounding terms, such as microbiome, genome, genotype, phenotype, but I'll try not to get too bogged down.

Strictly speaking you'd be better off contrasting genome with genotype.

In a nutshell, a genome is a full sequence of genetic information, while a genotype is the set of variants of the same gene (or set of genes) in a single organism. But that begs a bit more detail.

I'll start with genome, since it's fairly well known:it's the full sequence of an organism's genetic information. For humans, this is commonly understood to be the sequencing of the full set of 23x2 chromosomes in the nucleus of (nearly) every cell. But depending on the conversation, you'd include the sequencing of mitochondrial DNA, which sits in an organelle of the cell outside the nucleus.
Likewise, a microbiome is a sequencing of a microbial community (but like I said, I bet it's just sampled, not fully sequenced - too complex, otherwise).

The concept of genotype typically applies to a 'gene' at a time, which is a specific subset of a genome. The genotype of a gene is the set of versions of that gene in a given organism (person). By that, I mean that we have two copies of most genes - you'll typically understand that pair as consisting of dominant and recessive versions (alleles) - although it's slightly more complicated than that. So a person's genotype for a given gene (which specifies or influences a characteristic) is a specification of the two versions - variants - mutations - the person has.

Wikipedia's take is a bit different from that: if you take the full set of genetic differences within an individual, that's it's genotype, and that's how that individual differs genetically from someone else - by the sets of differences between the two people. But genotype is not usually examined in totality as a genome may be - although you may talk about a person's genotype for a small set of genes that influence a characteristic of interest.

So in fact, genome and genotype can be seen as fairly similar in totality, but it's all about how you analyse/consider it.

Phew. I don't think it's worth going into phenotype today. Suffice to say that it's more to do with outcomes (for a given individual) of a totality of genetics plus environment (including hologenome).

Thank for that really comprehensive answer Stephen. It brought back the days of The Selfish Gene, The Blind Watchmaker and The Extended Phenotype - my introductions to genetics!

I strongly recommend Dawkins' The Ancestor's Tale - my favourite of his.