Word of the day: Chevrotain

Another word with evolutionary significance.


A chevrotain is also known as a mouse deer (which can be somewhat deceptive).  The name comes from French, and roughly translates as 'little goat'. 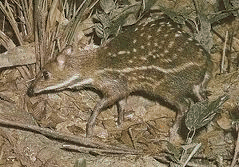 It does look halfway between a mouse and a deer, but it's more meaningful to think of it as a very small deer: you couldn't get a real-life mix between a rodent and an ungulate (they're clearly genetically too distant).

They're actually a group of species (called a 'family' in the old, Linnean classification) found in Africa and Southeast Asia - with some variation in appearance between species.  This grouping includes the smallest ungulates in the world.
The rodent features are misleading, and would be an example of convergent evolution - that is, unrelated animals that evolves similar features for similar environmental niches.

Where did I encounter this word?  This is what makes this species significant: recently there was a Wikipedia feature article on giraffes.  They're (even-toed) ungulates - which evolved from creatures that looked rather like this 54 million years ago.
Posted by S Simmonds at 10:45 pm