Word of the day: Cardiomyocyte

A cardiomyocyte is a heart muscle cell. 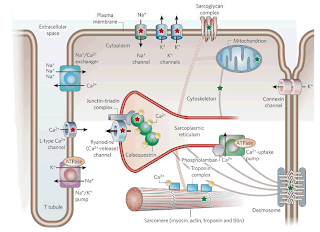 Paraphrased from New Scientist, 5 May 2012: After a heart attack, fibroblast cells form scar tissue on the damaged areas, but they don't pump properly like cardiomyocytes. Dzau (Duke University) used a virus to deliver four microRNAs to switch the fibroblasts to cardiomyocytes. Viruses are, more or less, RNA (or DNA) factories. That is, they are much smaller than normal cells, and spend their lives using a host cell's own mechanisms to manufacture more genetic material.  Preferably its own, but with the benefits of modern genetic engineering, clearly they can be taken advantage of for the benefit of the host cell.


microRNA: short strips of RNA that bind to messenger RNA to stop genes being expressed.

It's not clear to me whether this happens at transcription inside the cell nucleus (like epigenetics, but acting on the RNA), or translation (that is, preventing the ribosome properly decoding some of the RNA into proteins outside the cell nucleus. Either way, it's pretty clever to be able to:
a) identify the switches that change a fibroblast to a cardiomyocyte. Possibly just a function of what proteins are expressed at the ribosome
b) engineer a virus so that it expresses the right set of RNA strands to do the trick
c) deliver the virus to just the right cells.


(I note that there's been another effort to achieve the same outcome - fibroblast to cardiomyocyte - in a completely different way: using stem cells: http://stemcells.nih.gov/info/scireport/chapter9.asp)

Where did I encounter this word? Yesterday, in that New Scientist (I'm behind in my reading!)