Word of the day: Hussite

- which was the destination of this arc of words. 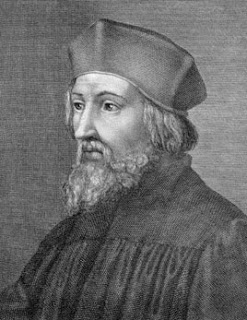 Jan Hus was an early protestant (ie non-orthodox Christian), in the days when that was a fatal move.  Bohemian in name, but not by nature.

To cut a long story short, the end (of the beginning, so to speak) came about in 1414 when he attended a Great Council of the Christian church in Constance.  This council was originally convened to resolve the existence of three (!) opposing popes.  The eastern orthodox church was invited too - it was hoped the council could solve the big Christian schism between the eastern and western churches. However, those issues proved rather difficult, so for diversion they decided to condemn a heretic.  Jan?  Oops... but you've given me safe conduct to this council!  Well, not any more...  so they burned him at the stake.

(... once that was out of the way, they eventually sorted out the popes - by booting out all the others and electing a new one.  The schism?  Well, that was just too hard.)

So, as you can imagine, being a Hussite was a rather dangerous calling at the time.


The Hussite wars followed over the next twenty years.  Although ultimately not too succcessful (for the Hussites), it's a significant chapter in Bohemian history.


Where did I encounter this word?  In a podcast called Europe From Its Origins.  Dense, academic, sometimes quite polemic.  It's put together by Joe Hogarty; his favourite word is Christendom.
Posted by S Simmonds at 11:14 pm

I read the very interesting Wikipedia article. Hussite is a word that I knew but was always too lazy to investigate. Thanks for doing the spade-work!
Click here for Bazza’s Blog ‘To Discover Ice’