Word of the day: copepod

A copepod is a type of crustacean.  It might make you think of arthropod, the phylum (body type) that crustaceans belong to, but the prefix -pod means foot, of course.  The name copepod comes from Greek, meaning oar- or handle- and -foot.

The copepoda are actually a subclass, in the Linnean classification.  Which mainly means there are quite a few species of them.

If you look at the photo in the Wikipedia entry, it actually looks like plankton.  I didn't know crustaceans could be planktonic - or vice versa.  There you go.
However, plankton is just a general term for small marine life (either animal or plant) that lives near the surface of the ocean.  So things that feed on plankton are just feeding on... "stuff". 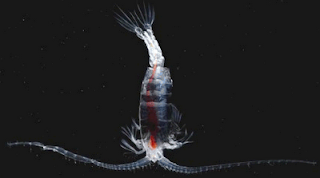 And now to what brought me to this word (something Wikipedia doesn't mention): some species of copepod are bioluminescent, meaning they emit light.  The actual mechanism involvese a combination of two substances: luciferin, a pigment that reacts with oxygen; and luciferase, an enzyme (a protein catalyst).  Interestingly enough, this very mechanism has evolved separately in a several different organisms, including fireflies and anglerfish.  I guess it shows that this kind of mutation is:
a) useful
b) not too hard to arrive at (for example, just a couple of point mutations).