Word of the Day: Omnium

Omnium - Sounds rather singular and meaningful, doesn't it? 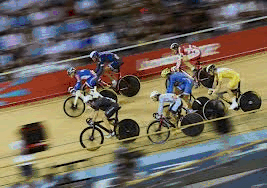 It's just a new-ish olympic category - a multiple event for track cycling.

Wikipedia says the word is Latin for "all around the thing" - although with what little I know of Latin, I'd guess it's more like "all thing".

Don't know why this word seems to have been snaffled for the Olympics - and track cycling, at that. It's a very generic construct. Maybe there was no Latin word for Cycling - yet Latin is constantly being updated for the modern world.

I am not too fond of this modern construct/usurpation.  Tomorrow's word is another recent coining that gets my goat.

Where did I encounter this word? Sunday, listening to radio, got pulled up by a word I'd never heard before.  The casual disbursement of the word itself was more noteworthy than the context.
Posted by S Simmonds at 10:49 pm

Email ThisBlogThis!Share to TwitterShare to FacebookShare to Pinterest
Labels: Word

Thank you for explaining something that I had been wondering about. The words and phrases that have been over-used (at least on UK TV) at these Olympics are 'execute', 'fastest in history' and 'best on Earth' (they are obviously excluding aliens!)
Click here for Bazza’s Blog ‘To Discover Ice’