The weekend Herald ran a recapitulation of the Taman Shud mystery, where an unidentified, well-dressed man was found dead at an Adelaide beach in 1948.

I had come across this before, mainly in the context of cryptography: he had a code that could not be deciphered.  But it wasn't until the Herald article that I actually saw a photo of the code - and it instantly made sense to me. 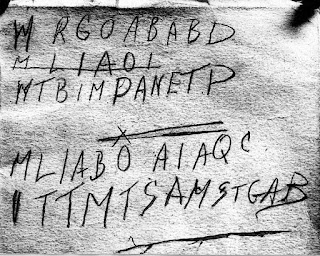 What else could it be but an initial-letter code?  That is, he's using these notes as a memory jog, for something like a to-do list or a set of options.  Initial letters instead of the full sentence could be because:
However, I'd clearly go for the former.

It matters not.  But since it's a string of personal reminders, they're unlikely to ever be successfully interpreted.  Some guesses have been made, including a draft suicide note.

The man's clothes were traced back to the US.  The disparity between them and his semi-literate handwriting have been noted.  An exhumation has been advocated, which may provide further DNA clues.

But the code's clear.  I look on it as an application of Occam's razor: don't multiply factors unnecessarily.