What makes Australia different from the US

I saw a number of internet memes around the recent US election.  Most were average, a fair few scatological, and a handful were really funny (viz for example Tony Abbott, and Big Bird).


Having seen the number of Americans who swore they would move to Australia if Obama won, it was gratifying to see such a succinct response: 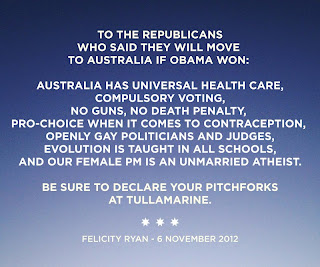 Further, a clear and consistent majority of Australians preferred Obama to win - as did most of the rest of the world (bar Pakistan).  Doesn't leave much of an option for those wanting to move.

It's important to have heroes - and vision.  And the world is a slightly better place.
Posted by S Simmonds at 12:11 pm

Email ThisBlogThis!Share to TwitterShare to FacebookShare to Pinterest
Labels: Australia, Obama, US election

In my considerable experience of the United States the population are usually so insular that they have no conception of life in other countries - even Canada and Mexico.
There was a ghastly TV magician called Paul Daniels who swore that he would leave Britain if Labour won an election. They did and there were loud and happy demands for him to go. Sadly he is still here.
Click here for Bazza’s Blog ‘To Discover Ice’