World: Putting bees in the bonnet 1: Chavez and Chomsky

So much to blog about, so little time... sigh.

Now what shall we do today... well, an easy one is this picture: 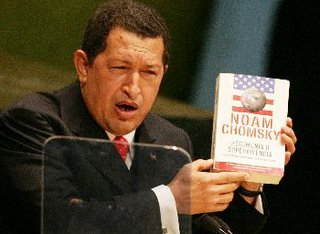 Unless you've been under a rock, you'd recognise this as Hugo Chavez, Venezuela's president, addressing the UN General Assembly, and waving a copy of Noam Chomsky's book Hegemony or Survival: America's Quest for Global Domination. Two provocative people for the price of one.

A week later, it's back at number 40, which is still no mean feat by any stretch.


Now, Chomsky, I believed, was more an anarchist, and Chavez a left winger. And only occasionally do the twain happen to meet. However, I'm willing to stand corrected on the basis of Chomsky's Wikipedia entry, which says he considers himself a libertarian socialist with anarchist sympathies. And he's a wobbly - I didn't even realise they were still around.

And apparently, Time magazine this year rated Chavez as one of the world's 100 most influential people. (Gee, I must have been living under a rock!)

Ahh, I'm rambing. Still, never thought I'd see either of the blokes capable of causing such a stir, in this brave new century.
Posted by S Simmonds at 9:25 pm

I think it a pity that Chomsky's eccentric political views are now overshadowing his much more important linguistic thories.

Glad you like Chomsky for his linguistics. I think his theories will live on.